Under the canopy of an ancient fern forest near the border of Arizona and New Mexico a colossal crocodile-like reptile took a bite out of an even larger, toothy giant. The attack failed and the victim limped on to fight another day, until its carcass was finally pillaged by another scaly monster and smaller, pickier scavengers. Studying bones collected over a century ago, scientists are now able to reconstruct these scenes from the ancient Wild West using new digital tools familiar to fans of C.S.I.

Stephanie Drumheller, from the University of Tennessee, and her team first noticed the fossils, collected in 1913, in museum collections. They observed deep bite marks in two separate thigh bone specimens that would have belonged to two rauisuchians (row-ay-soo-keeans), wolf-like reptiles with the head of Tyrannosaurus rex. These 30-foot-long carnivores were supposed to be at the top of the food chain 218 million years ago in the Chinle Formation, an ancient ecosystem preserved in flame-red rock that gives the Painted Desert its name. Who took the bite out of these meat-eating giants?

Fortunately, the attacker left a weapon at the scene of the crime. Deeply embedded near the hip joint in one of the bones is a massive, curved tooth. Using the same CT-scanning technology doctors use to create 3D images of their patients, Drumheller and her team digitally extracted the tooth, identifying the powerful predator as a 25-foot long phytosaur (fight-o-sore). Scientists thought the slender-snouted, crocodile-like reptile was a fish specialist, but this new evidence shows it fought one of the largest carnivores on the planet.

CT-scanners are a new, important part of the fossil hunting toolkit, allowing scientists to digitally dissect rare and delicate fossils to expose the secrets locked inside. Around the embedded tooth, Drumheller and her team digitally extracted healed bone, evidence that the rauisuchian escaped the phyotosaur’s attack and the wound had time to heal. Near the tooth are deep, unhealed bite marks, showing another large phytosaur attacked the same rauisuchian later, but there wasn’t time for that wound to heal. Closer to the knee are shallower, smaller tooth scratches, evidence of scavengers that picked over what was left behind by the phytosaur, just as modern vultures pick at a carcass once the lions have eaten their fill. 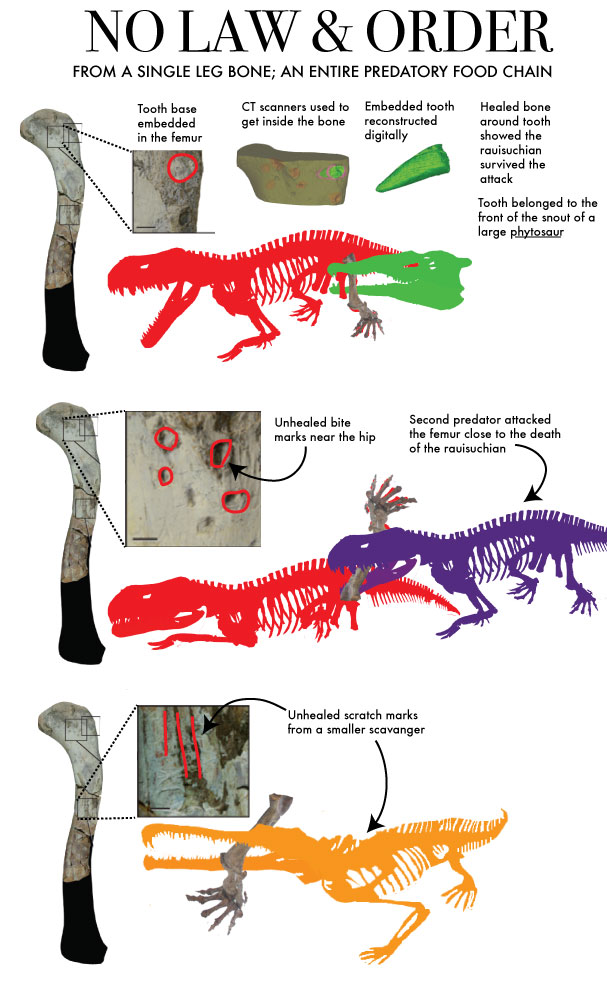 There are a lot of gigantic reptiles in the Chinle Formation and the hypothesis was that the large rauisuchians were the top of the land-based food chain, and phytosaurs were at the top of the aquatic food chain. If they stayed in separate environments, scientists had thought, then they never would have directly competed with one another for food. This hypothesis was based on observations of modern ecosystems with multiple large predators: competitors specialize. But these rauisuchain bones show the food chains were much more tangled than scientists expected.

The Chinle Formation is filled with lots of large carnivore species, more than any ecosystem known today. In order to understand how this predator-dominated ecosystem worked, Drumheller and her colleagues continue to search for fossils in the Chinle Formation and in museum collections for more evidence of the biological relationships between these extinct animals. Despite classic images of extinct animals like Tyrannosaurus and Triceratops fighting each other, actual evidence that preserves how ancient animals interacted with one another is very rare. This glimpse into the violent Chinle ecosystem is only the beginning of a larger effort to understand the rules that governed this ancient food chain.

A few million years after these fights took place, rauisuchians and phytosaurs went extinct and the large carnivorous dinosaurs like Dilophosaurus moved into the empty, meat-eating role on land. Were the carnivorous dinosaurs more specialized than their forerunners? When did modern ecosystems, filled with specialized carnivores, first take shape? If Drumheller and her collaborators can understand the ecological roles played by rauisuchians and phytosaurs, they will be able to untangle the origins of the dinosaur- dominated ecosystems that set the stage for our own.

One thought on Quick Bite: Clash of the Triassic Titans!