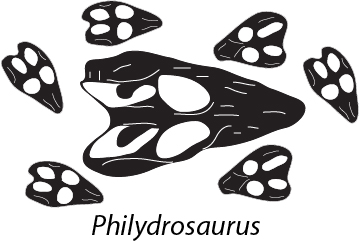 Reptiles aren’t known for being great parents. When it comes to time and energy spent with the kids, mammals get all the glory. Birds also spend a lot of time with the chicks after they hatch, but this was though to be a recent phenomenon related to the evolution of flight. Then scientists noticed crocodiles guard and nurture their chicks and paleontologists found evidence of dinosaurs spending time with their young long after they hatched.

Okay, maybe being an invested parent is a mammal and archosaur (the group that contains crocodiles and dinosaurs and thus birds) thing. But most reptiles are pretty uninvolved parents, right?

A 125 million year old fossil from the Yixian Formation in China shakes up the story. The specimen preserves a 2 foot-long, adult Philydrosaurus — a choristodere reptile distantly related to lizards, turtles, crocodiles, and dinosaurs — surrounded by six juvenile Philydrosaurus. The group was buried together with no other fossils mixed in, suggesting this group of seven ancient reptiles are one of the oldest known families from the fossil record.

Because choristoderes are such early off-shoots from the reptile family tree, the team of paleontologists lead by Dr. Junchang Lü from the Chinese Academy of Geological Sciences hypothesize the adult Philydrosaurus was doing what reptile parents had been doing for a long time: investing and nurturing young.

This would mean living reptiles like snakes, turtles, and lizards lost this trait during their evolution while mammals, crocs, dinosaurs, and birds held onto the trait. Fossils that preserve parental behavior are extremely rare and this fossil is a valuable glimpse into the family lives of early reptiles!