Antarctica is one of the great frontiers of paleontology. It’s been really far south for a long time, but it hasn’t always been frozen over. In February of 2016, a team of paleontologists and geologists set out on an expedition to the frozen continent in search of fossils from the end of the Age of Dinosaurs. Matt talked with two of the team members, Eric Gorscak and Patrick O’Connor both from Ohio University, about planning the expedition and what they hope to find at the bottom of the world. Follow the entire Antarctic Peninsula Paleontology Project (#AP3) team at www.antarcticdinos.org and @antarcticdinos! 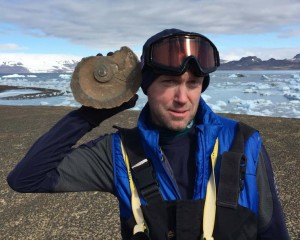 Patrick O’Connor is a Professor of Anatomy and Neuroscience at the Ohio University. Here’s a link to his lab’s website. His research is focused on vertebrate evolution on the megacontinent of Gondwana, a giant landmass that broke up through the Mesozoic and beginning of the Cenozoic to become Africa, South America, Australia, Antarctica, Madagascar, and India. In addition to working in Antarctica, he has active field projects in Madagascar, Tanzania, Zimbabwe, and Egypt. He’s worked on weird Gondwanan dinosaurs like Majungasaurus, weird Gondwanan crocodiles like Pakasuchus, and weird Gondwanan mammals like Vintana. 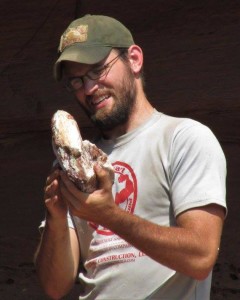 Eric Gorscak is a Doctoral Candidate at Ohio University where his research is advised by Dr. O’Connor. Eric’s research is focused on the evolution of sauropod dinosaurs, the gigantic, long-necked, plant-eating dinosaurs that seem to defy the laws of physics and biology. As part of his dissertation, he’s trying to sort out how gigantic titanosaur sauropods found around the world are related to each other. His most recent study described a new Tanzanian titanosaur called Rukwatitian.

Pat, Eric, and the rest of the Antarctic Peninsula Paleontology Project team want to figure out what was going on in Antarctica during Late Cretaceous, the last slice of time before the extinction of the non-avian dinosaurs. Most of what we know about the end of the Mesozoic comes from rocks preserved on northern continents, particularly North America. AP3 is trying to find a site in Antartica that will give them a perspective on the extinction from a continent far removed from familiar fossils of North America.

With an Antarctic frame-of-reference the team could ask big questions about extinction, like: Was the speed of the extinction found in North America the same everywhere around the world? Did all the same groups go extinct at the same time in the Northern and Southern Hemispheres?

Geologists working in Antarctica identified Late Cretaceous rocks and the AP3 has returned to the Antarctic Peninsula three times. Once in 2009 when Pat first went to Antarctica, once in 2011 when Eric first went, and now in 2016. Most of the rocks they’ve found so far were deposited in an ancient Antarctic sea. They are now on the hunt for the rocks that preserve the beaches and rivers that rimmed this Late Cretaceous sea. These coastal and riverine rocks would likely also preserve land-based animals like dinosaurs and Mesozoic mammals.

During the Late Cretaceous, the southernmost part of South America connected with the Antarctic Peninsula. The connection between the continents prevented the formation of the Circumpolar Current, the swirl of cold water that charges around Antarctica, keep the entire continent refrigerated today. Antarctica separated from South America between 40 and 25 million years ago, long after the extinction of the non-avian dinosaurs, meaning it was more comfortable in the Late Cretaceous than it is today. During the Late Cretaceous, Antarctica would have been seasonal, it was still very far south, and would have had long, cold nights during the Austral winter and long days during the Austral Summer.

To see images of the AP3 team in action on the outcrop where they were searching for fossils, check out their website and Twitter feeds. We’re hoping to catch up with Pat and Eric after they get settled back in Athens, Ohio to hear how their expedition actually turned out. Did the weather force the team to change plans? Did they find evidence of animals from the land? Did they find new fossils?

The answers will only help paleontologists learn more about Past Time!

Usually we put papers and books down here that are directly related to the interview. But in this case, there is more exploration to be done before the discoveries can be written up. We will keep you updated as AP3 publishes what they found! Also, check out the “Discoveries” tab at www.antarcticdinos.org to see some of the material they brought back from Antarctica!

For more on the natural history of the continent and the people who are trying to learn as much as they can from the ice-locked continent, check out Antarctica: A Biography by David Day.

For great reading on Antarctic exploration check out Empire of Ice by Edward J. Larson, an account of the race to the South Pole which dramatically illustrates the dangers of Antarctic voyages.