Conjuring up extinct environments, museums, books, and documentaries rely on art to show extinct animals revitalized in their ancient surroundings: the art of dinosaurs! This type of educational reconstruction is called Paleoart (or Palaeoart for the UK inclined). They are usually striking portraits of the weird place this planet used to be. But, you look at an image of a roaming Tyrannosaurus rex without wondering, “How much of that is real?” How do we know its bulk, its color, its environment, or its behavior? Where does the science start and the art (and hypothesizing) begin? Julius Csotonyi, a Candian paleoartist, sat down with us to discuss how he assembles his images which are on display in natural history museums across North America and fill his recently published book, The Paleoart of Julius Csotonyi. A single landscape by Julius is a blend of the latest knowledge from paleontologists, zoologists, paleobotanists, geologists, and geochemists, and as new information is learned, he is ready to update his paintings and present the world with a more accurate glimpse into the ancient past.

To listen to the episode, click here to subscribe on iTunes (and don’t forget to leave us a rating). You can also download or stream the episode by clicking here.

For images of Julius’s incredible work discussed in the episode (it’s tough discussing art in a audio podcast) click below!

There are more images arriving soon, but here are the essential reconstructions we discussed in the episode. Everything else should be up here by the end of the week!

Here is the image that first got Matt riled: 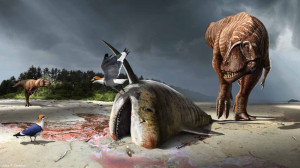 It depicts Lythronax, a relative of Tyrannosaurus rex investigating a shark carcass along the sandy beach of Laramidia, somewhere near present-day Utah (for more information on the Lythronax, check out this episode of Past Time). As Lythronax stalks up to the shark, fine feathers are visible on her striped neck and sides. In the background is a copse of pine trees, and a pair of sea birds are getting out of the way. We can’t possibly know all these details…can we? 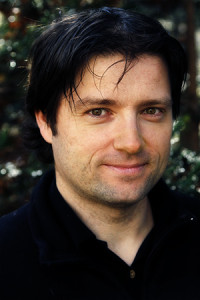 Lythronax and her world were painted and composited by Julius Csotonyi, a Canadian artist who specializes in Paleoart. Paleoart is any artistic rendering of the extinct past with a nod to scientific accuracy. Some paleoart efforts take the science more seriously than others, and Julius has earned a reputation for being especially attentive to the latest fossil discoveries, folding them into his work.

Part of the reason he may be so responsive to scientific discussion is because Julius earned his PhD studying microbiology. While working on his research on the smallest organisms on Earth at the University of Manitoba, he continued to nurture his childhood fascination with drawing gigantic dinosaurs.  While still a graduate student, Julius was commissioned to reconstruct ancient worlds, and now he is a full-time natural history illustrator.

Julius uses a method called digital compositing to create his almost photorealistic images from a time long before cameras existed. He starts by painting his subject with reference to natural history photographs and video of living animals in the wild. For instance, this image of Suchomimus whipping a cousin of crocodiles through the air was inspired by images of killer whales flipping seals out of the water and herons hunting for frogs at the shoreline.

As he paints the animals and their environment, he uses Photoshop to sample real-world textures from photographs to create realistic skies and plants around the extinct creatures. A photograph of his dog’s fur was used to cover a Cretaceous marsupial and early morning walks near lakes and fields have helped him stage the lighting for his dynamic images.

A digital painting by Julius is the “state of the art” in paleontology, but there is a lot to still learn about the past. When a new skeleton is found that helps flesh out the proportions of a new dinosaur, Julius is able to go back to his digital images to update his reconstruction. As his career progresses, each new painting will be a summary of the latest hypotheses about an extinct animal’s biology and the diversity of the surrounding environment.

Keeping reconstructions up-to-date with the latest paleontological discoveries is part of being a paleoartist. Some of the first reconstructions of dinosaurs were based on a few scrappy fossils. Animals like Iguanodon were shown as rhino-like animals with spikes on their noses, but that was because all paleontologists had to work with were a few big bones. As more dinosaur fossils were discovered and described, paleontologists realized most dinosaurs walked on their back legs. The art was updated and the tail-dragging kangaroo-like dinosaur arrived on the scene. With closer scrutiny of tail anatomy and trackways, paleontologists realized dinosaur tails needed to get up off the ground and the paleoartists updated their images of the past once again.

The latest major revelation in the world of dinosaur reconstructions is the understanding that most meat-eating dinosaurs were covered in feathers, and maybe other dinosaurs had a little feathery fuzz. If you look at Julius’s work, you can watch dinosaurs get more feathery as more fossils of feathered dinosaurs were described over the last decade.

For more spectacular images of the ancient world assembled with a careful eye on scientific research, check out Julius’s latest anthology, The Paleoart of Julius Csotonyi. Along with the images, there are interviews with Julius about his process, and comments from paleontologists on the animals depicted in each scene. It would make a great gift for the dinosaur nut in your life, or maybe a conversation piece for your shelf. 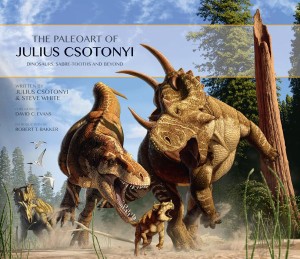 Check back at the end of the week for more detailed illustrations of Julius’s work and the history of paleontological reconstruction! 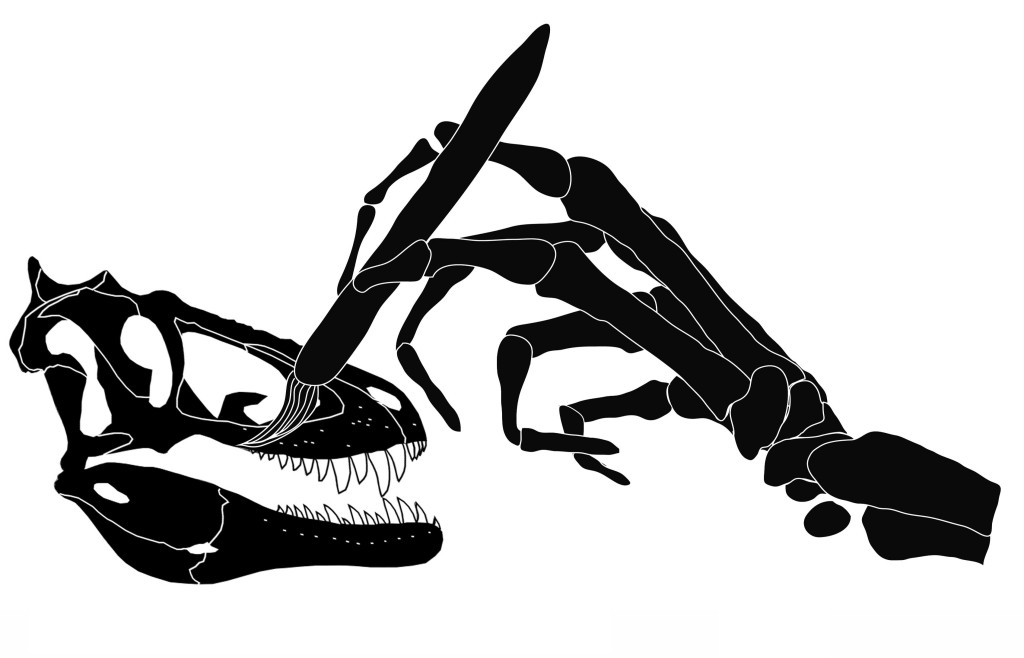