Meet Alienochelys selloumi, a giant, snorkel-nosed turtle with powerful, shell-crushing plates in its massive beak! The distant relative of the largest turtle alive today, the leatherback sea turtle, Alienochelys swam the ancient ocean of North Africa at the very end of the Age of Dinosaurs (the Late Cretaceous). It was found in the same rocks as Ocepechelon, the “whale turtle” discussed in our first Quick Bite back in July. There were a lot of giant, goofy, snorkel-snouted turtles in Cretaceous Morocco! When Alienochelys’ discovery was announced, another paper was published describing fossilized pigment molecules that showed many marine reptiles, including a 55 million-year-old leatherback sea turtle, were dark in color, an adaptation we see in many modern swimming vertebrates. It’s time to pick a new-favorite fossil turtle with Past Time!

Alienochelys – The recently discovered, giant, grinding turtle that would have been swimming through the ocean that once covered Morocco 67 million years ago and the subject of this Quick Bite episode.

Ocepechelon – A tube-snouted, giant sea turtle from the same rocks as Alienochelys. We discussed Ocepechelon on our first Quick Bite episode noting it had its nostrils up on top of its head much like a modern whale, but unlike any other sea turtle. Now we know Alienochelys shared this feature.

Leatherback sea turtle – The largest turtle in the world and one of the largest living reptiles, Dermochelys coriacea is the only surviving member of a group of turtles that included Alienochelys and Ocepechelon. A fossil leatherback sea turtle from 55 million-years-ago was part of a study that showed the dark coloration of leatherbacks has been around for a really long time.

Ichthyosaurs – Literally “fish lizards”, Ichthyosaurs were a diverse group of marine reptiles that thrived through most of the Mesozoic (The Age of Dinosaurs). They were very well adapted to their ocean homes, looking more like dolphins or narrow-snouted sharks than land-dwelling reptiles. Their dark coloration was part of the ancient pigmentation study we discuss.

Mosasaurs – A group of marine reptiles that became diverse as ichthyosaurs and plesiosaurs (long-necked marine reptiles) declined. Mosasaurs are squamates, the group that includes snakes and lizards, and they reached gargantuan sizes. A mosasaur fossil was also included in the ancient color study that showed marine reptiles were colored more like dark modern whales than colorful green reptiles.

In the summer of 2013, a French and Moroccan team of paleontologists announced the discovery of a very weird sea turtle they named Ocepechelon (OCP is the petroleum and mining company that gave the expedition technical support so they named the turtle for the company). Ocepechelon was represented by a huge skull that would have been attached to a very large sea turtle. But the huge size of the animal wasn’t the strangest feature of Ocepechlon. That prize goes to the tube-like, toothless snout that the paleontologists involved in the discovery of Ocepechelon hypothesized would have been used as a suction-feeding adaptation for sucking up the ancient turtle’s vertebrate prey. This adaptation is seen in many fish and in toothless beaked whales. Ocepechelon was also unique among turtles for having its nostrils up between its eyes instead of in front of them, giving the turtle a whale-like blow hole. 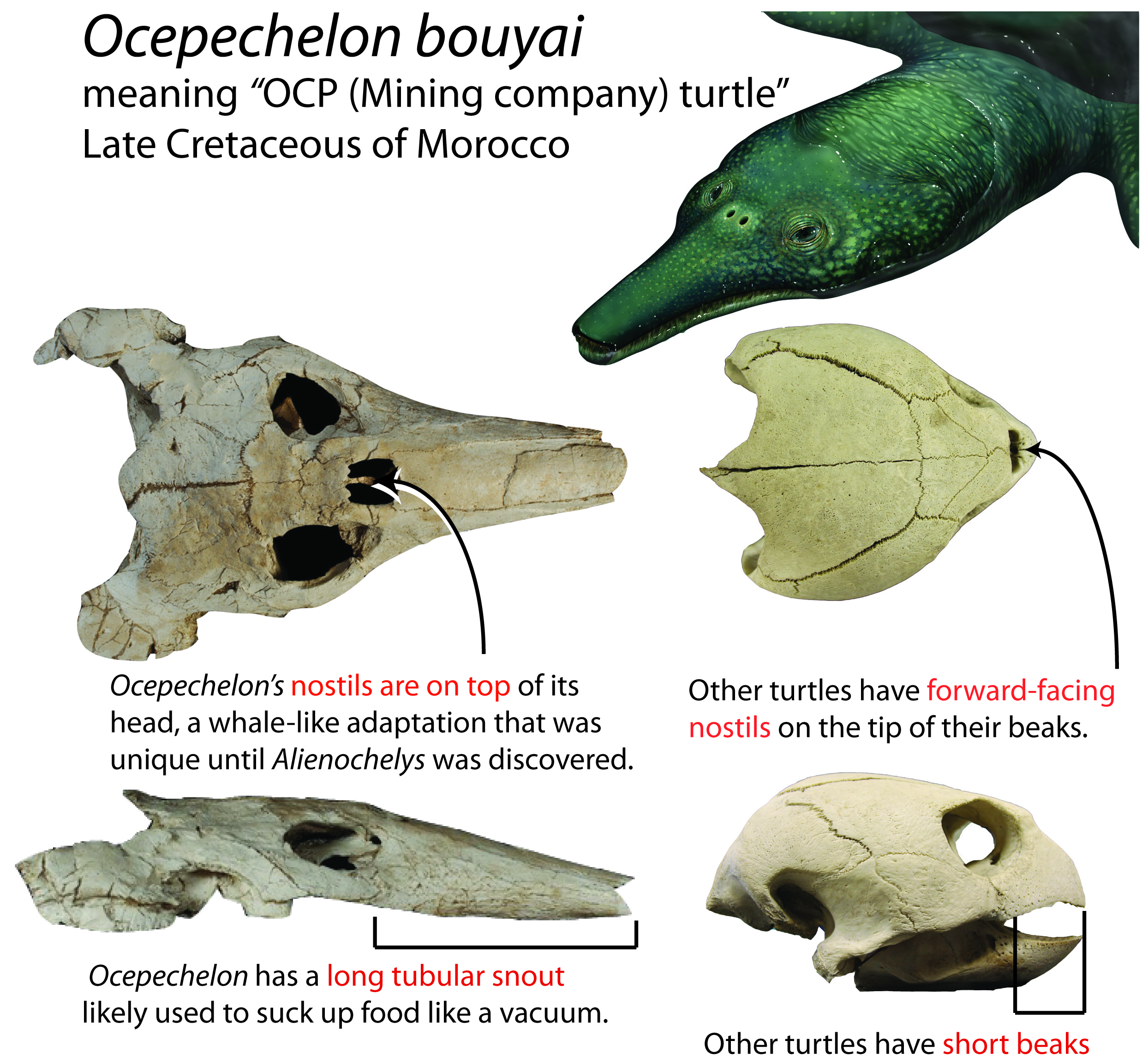 In January 2014, the same team of French and Moroccan paleontologists announced the discovery of another strange turtle from the same rocks that produced Ocepechelon. This turtle was also enormous, rivaling the size of Ocepechelon and it shares the whale-like blow-hole with Ocepechelon. It’s big, and also from the Late Cretaceous (about 70 million years ago), so maybe these two turtles were close relatives as whale-nosed cousins? 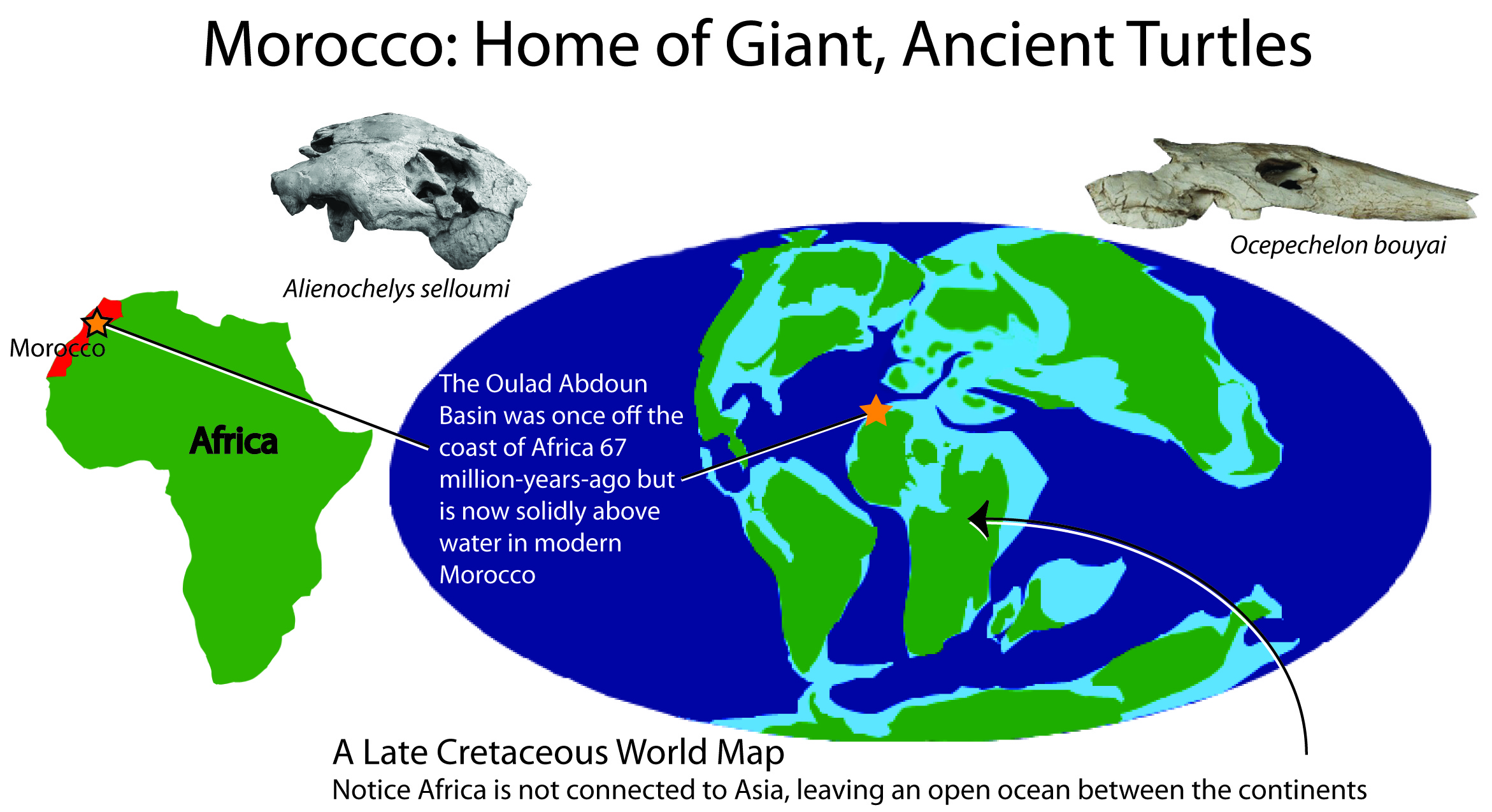 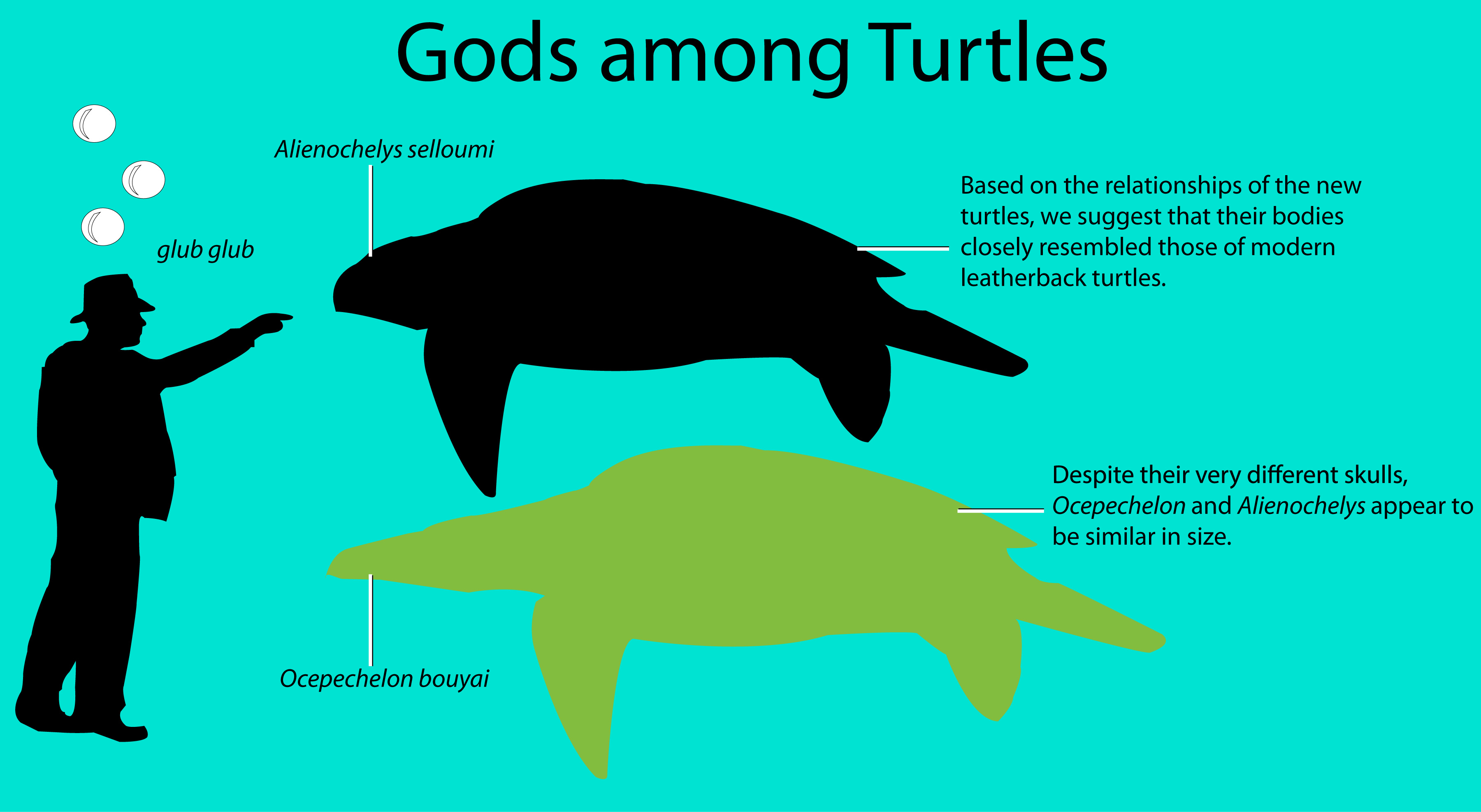 But, the face of the new, giant turtle is nothing like Ocepechelon‘s. Instead of a narrow tube snout built for sucking up squid and jellyfish, the new turtle, called Alienochelys (literally “The Strange Turtle”), had huge, broad crushing plates in its shortened snout that would have been better for grinding shelled invertebrates than sucking up soft squid. 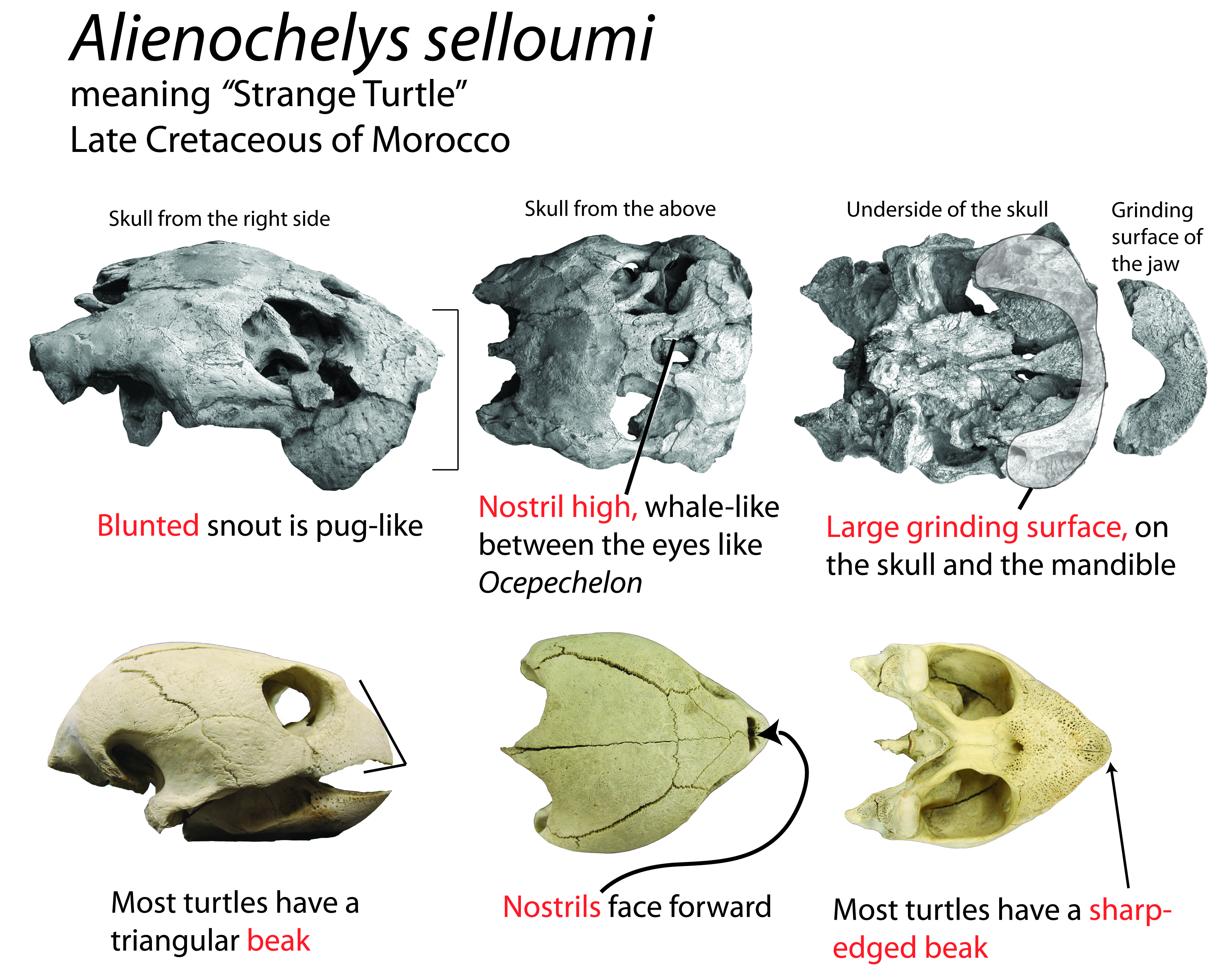 When the researchers compared the giant sea turtles to other turtles, they found the closest living relative of Ocepechelon and Alienochelys is the leatherback sea turtle, an animal with neither blow-hole, nor crushing plates or tube snout, showing turtles, who seem pretty predictable at first glance – big shell, beak, short tail – can have a lot of unexpected diversity. 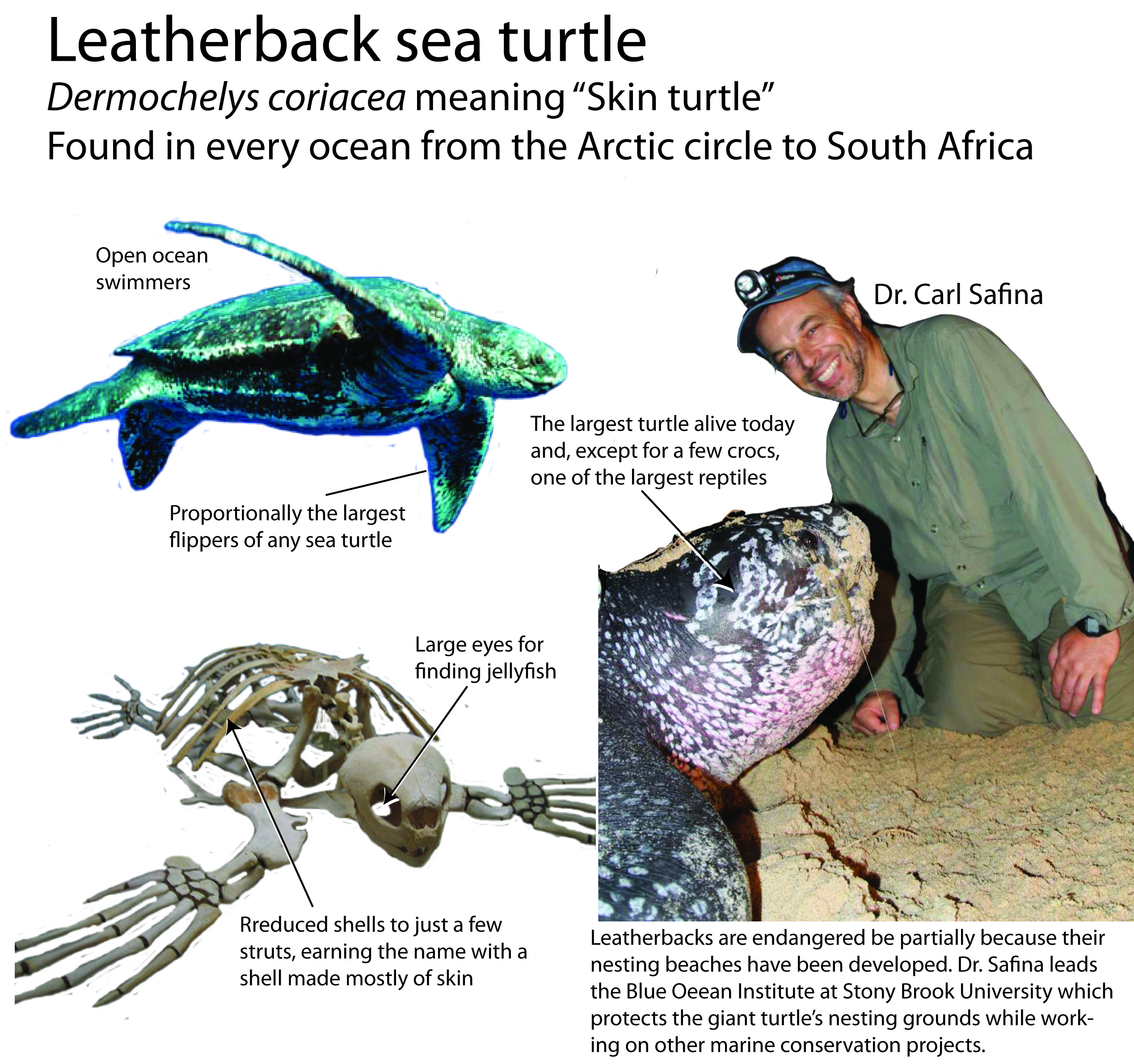 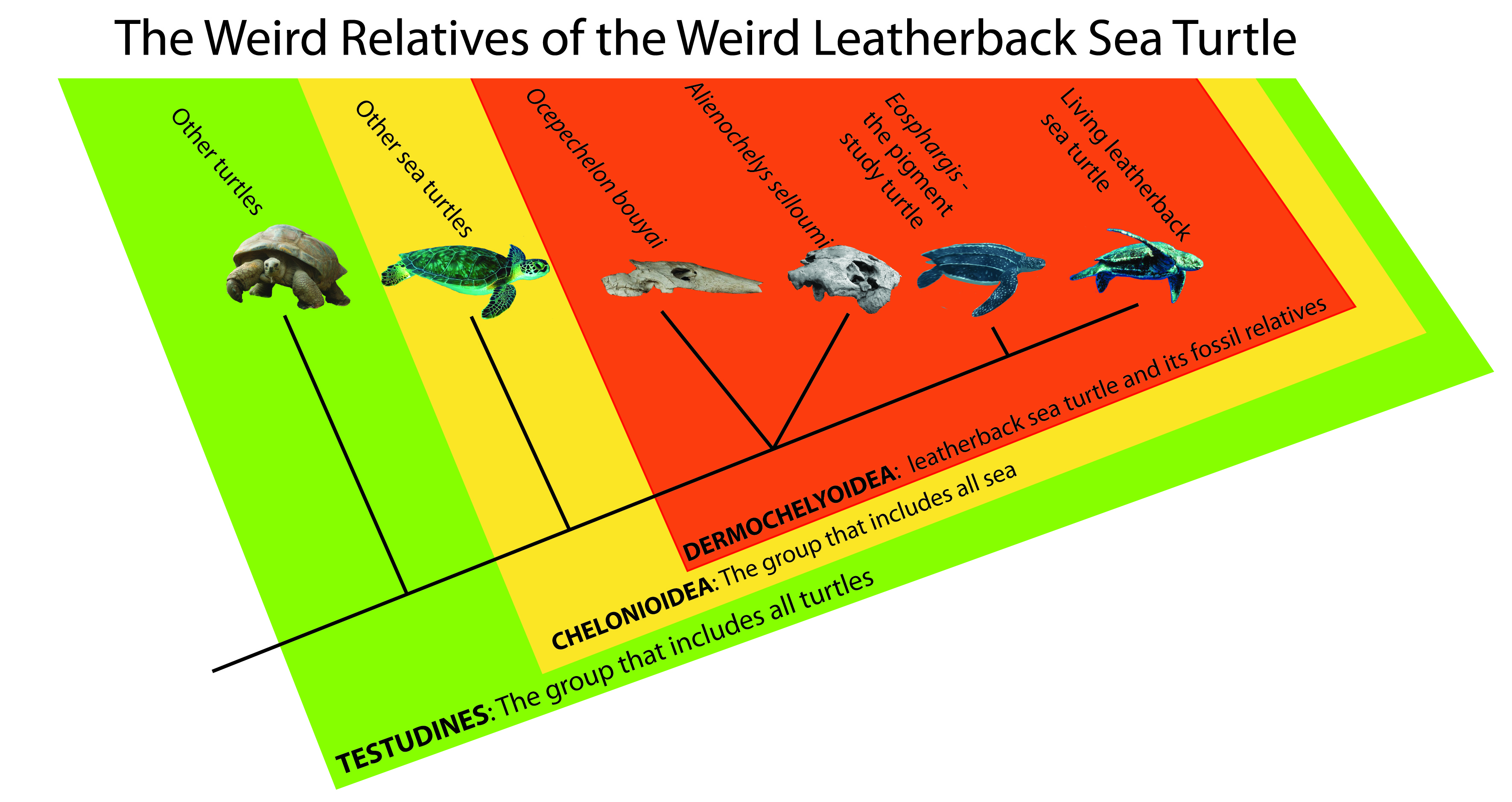 Modern leatherback turtles make their living by diving deep in the ocean in search of jellyfish. They are dark blue to black with faint speckles, an adaptation that lets the hunting turtle avoid being seen by predators and potential prey in dark waters, an adaptation that has likely been part of the leatherback lineage for a long time, based on a recent study…

How much of an animal is preserved by the fossilization process really depends on where and when an animal is deposited. Fortunately, in some very specific circumstances such as oxygen-poor water, and fine-grained sediments; a fossil can be preserved with soft tissues preserved alongside the harder, more easily fossilized materials such as teeth and bone. Fortunately at least one close relative of leatherback sea turtles, called Eosphargis, died in an Eocene ocean 55-million-years-ago died and was buried in these soft-tissue-preserving circumstances.

Early in 2014, a team of scientists lead by Johan Lindgren from Lund University in Sweden studied dark patches preserved with this leatherback sea turtle fossil, along with dark patches of skin preserved with two other specimens of marine Mesozoic reptiles. One specimen of preserved skin belonged to a large mosasaur, an extinct lineage of swimming reptiles closely related to modern day lizards. The other skin patch belonged to an ichthyosaur, meaning “fish lizard”, another extinct swimming reptiles lineage that isn’t closely related to any scaly beast alive today.

Using these three specimens from very distantly related animals, the researchers demonstrated dark clusters once thought to be preserved bacteria were actually evidence of melanosomes, the cellular structures responsible for producing melanin, the natural pigment that produces dark skin, fur, and feathers in animals including birds, whales, lobsters, and humans. The researchers then were able to map the dark skin covering these ancient marine creatures, and they found these creatures whose modern relatives tend towards greens and browns were probably really dark in color. 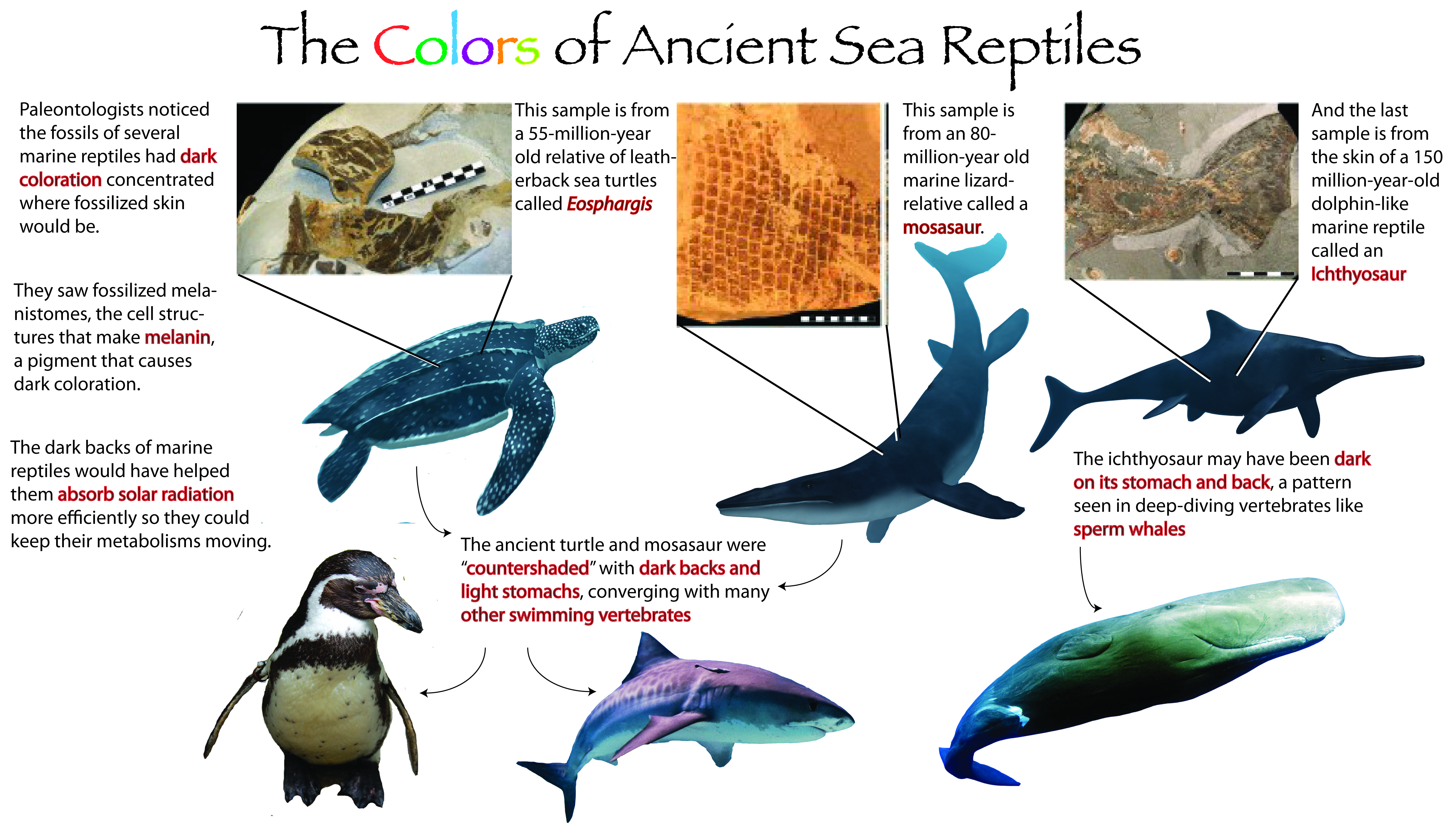 A lot of predatory animals that live in the ocean are dark, especially on their backs. This may be a crypsis adapation. Crypsis is the technical term for evolved camouflage and an animal with a dark back would be well-camouflaged from other animals looking down into the depths of dark water. Many predators then have light stomachs, hiding them from animals looking up into the well-lit waters where the predator can blend into filtered sunlight. This combination of a dark back and light stomach is called countershading and is used by many animals in the ocean including sharks, killer whales, tuna fish, manta rays, and – important for this study – leatherback sea turtles. The fossilized relative of leatherbacks had the distictive dark patches on its back, visible in the living species, suggesting leatherbacks have been occupying their current open-ocean-going niche as active hunters and occasional prey for at least 55-million-years.

Animals that don’t have countershading and are dark all over their bodies tend to spend a lot of time in deep water where they don’t want to give their position away to their prey or predators. One massive example of a completely dark predator is the sperm whale, Physeter macrocephalus. Sperm whales like to hunt large – even giant – squids deep in the ocean and their uniform grey color probably helps hide them from the sophisticated eyeballs of their prey. The icthysaur specimen scrutinized by the ancient color team had dark colors on its stomach as well as its back. Paleontologists have pegged many ichthysaurs as squid specialists based on their narrow beaks, large eyes, and the remains of squid shells preserved in their stomachs. Their shroud of dark skin supports this hypothesis as they converged with the specialization seen in sperm whales.

It was hard for the scientists to figure out if Tylosaurus nepaeolicus, the massive mosasaur species used in the study, was coutershaded or dark all over, but they do know its back was dark. In addition to using a dark back for camouflage, a dark back may be especially useful to deep-diving reptiles as a heat and light absorbing surface. Where marine mammals – like all mammals – have fast metabolisms that sustain their body temperature regardless of the water’s temperature, marine reptiles would have had slower metabolisms that benefited from a solar boost to get their bodies primed and moving after dives to frigid depths. The dark-backed leatherback sea turtle has been observed by marine biologists using its shell for exactly this purpose: basking in the sunlight at the water’s surface after coming up from a deep, jelly fish-fueled dive.

Maybe Ocepechelon and Alienochelys basked at the surface after a dive, recharging for another bout of sucking up prey (Ocepechelon) or grinding it to dust (Alienochelys)? Now that paleontologists are honing their techniques for recognizing ancient color, the ancient oceans my end up being darker – and always will be weirder – than anyone expected!

For more information on the modern relative of Alienochyles, the leatherback sea turtle, check out Dr. Carl Safina’s Voyage of the Turtle: In pursuit of Earth’s last dinosaur. Dr. Safina is a researcher and conservationist based at Stony Brook University. He founded the Blue Ocean Institute where he continues to advocate for marine conservation as an author, PBS host, and lecturer. 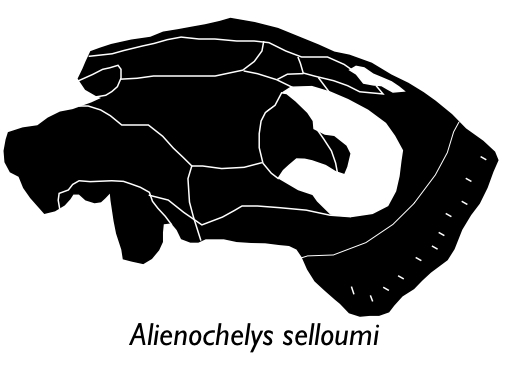