Tyrannosaurus rex is a dinosaur celebrity, a villain in most dinosaur movies and documentaries, but where did the massive beast come from? On November 6, 2013, a team of paleontologists including our expert in this episode, Dr. Randy Irmis from the University of Utah and the Natural History Museum of Utah, published two new skeletons of Tyrannosaurus’s close kin: Teratophoneus and Lythronax. The skeletons reveal Tyrannosauridae (T. rex’s family) was diverse 80 million years ago with different species living in different parts of Western North America. The new genus Lythronax is the oldest member of the Tyrannosauridae even though its anatomy closely resembles the last species of tyrannosaurid, T. rex. When Lythronax was tromping around, a massive sea divided Western North America, called Laramidia, from Eastern North America, called Appalachia. Laramidia was a long, skinny continent that ran from Alaska to Baja California. In general, in modern ecosystems, the larger the land-mass, the more species can live on it. Laramidia was one-tenth the size of the continent of North America, but it supported more species of large animals than the complete continent of North America today! Geologists, paleontologists, and ecologists aren’t sure how this was possible so they continue to search for new fossils and the origins of the North American ecosystem. New fossils, like Teratophoneus and Lythronax show us there are still more questions to answer using the fossil record! Sic semper tyrannis!

To listen to our interview with Dr. Irmis, click here to stream the episode or download the mp3 file or click here to subscribe to the podcast and listen through iTunes. After you’ve listened to the episode, click below for even more context on the world of Lythronax, the “Gore King” and the heir to his dy-nasty Tyrannosaurus rex! 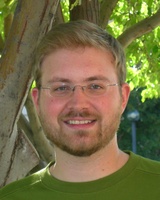 Our expert for this episode is Dr. Randall Irmis, one of the scientists on the team that described new material of Teratophoneus and described the new taxon Lythronax. The paper they wrote describing the animal can be found here. Dr. Irmis is an Assistant Professor in the department of Geology and Geophysics at the University of Utah. He is also a curator of paleontology at the Natural History Museum of Utah.

Dr. Irmis and his collaborators have spent months at a time working in the beautiful, but forbidding badlands of Grand Staircase-Escalante National Monument in Utah. Grand Staircase was one of the last places in the lower 48 States to be mapped and it remains a very difficult place to access with supplies helicoptered in and fossils helicoptered out! But all the effort is worth it, when there are new animals coming out of the ground…

When Tyrants Ruled The Earth

It is somewhat surprising to dinosaur enthusiasts that Tyrannosauridae did not come from a giant, carnivorous ancestor. Other carnivores, like Allosaurus and Spinosaurus, were the top predators in the Jurassic Period and the earlier parts of the Cretaceous. In those past times, the grandfathers and grandmothers on the line to Tyrannosauridae were suprisingly small carnivores, rarely larger than a German Shepherd. Only during the Late Cretaceous Period, seemingly after the other giant carnivore lines had died out, did the tyrannosaurs begin to get bigger.

The Gore King and the Monstrous Murderer 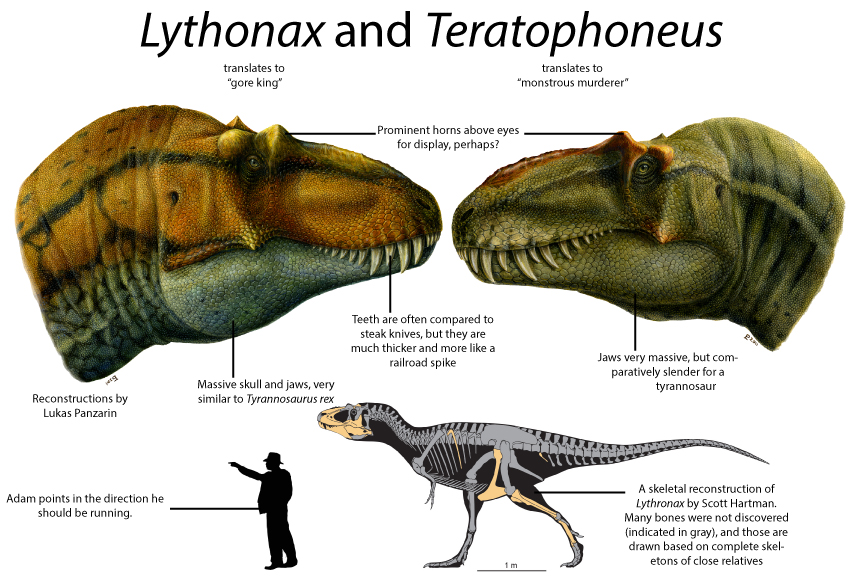 In the paper published today (Wednesday, November 6, 2013) Dr. Irmis and his colleagues – Dr. Mark Lowen, Dr. Joe Sertich, Dr. Philip Currie, and Dr. Scott Sampson – describe new material from Teratophoneus, a relative of Tyrannosaurus that was already known. With this new material our picture of the “Monstrous Murderer” is more complete. The team also describes a new species: Lythronax argestes. The “Gore King” is the oldest known species in the family Tyrannosauridae, the family that also includes Tyrannosaurus rex.

Lythronax was smaller than Tyrannosaurus rex and lived 15 million years earlier, making the new species the oldest tyrannosaurid known. The geologic formation in which the skeleton was discovered is called the Wahweap (say that five times fast…), which has yet to yield many dinosaurs. So far, it appears that Lythronax regularly fed upon duck-billed dinosaurs like Acristavus. What makes Lythronax so surprising is the number of anatomical features it shares with the much later species Tyrannosaurus rex, which lived over ten million years later!

In the episode, we discuss the nature of North America in the Late Cretaceous Period. Between 100 and 70 million years ago, the entire continent was divided by a shallow sea. This sea was once filled with colossal marine lizards, long-necked plesiosaurs, toothed birds, and the occasional diving Pteranodon. The sea divided the land into two smaller continents: Appalachia in the east and Laramidia in the west. As residents of the eastern United States, we are saddened by the meager dinosaur fossils (so far) discovered in the east. However, the vast and exposed formations in the west tell an amazing story.

Fossil-bearing formations dot the landscape of Laramidia, from the North Slope of Alaska down into Mexico. Each formation exhibits a similar ecosystem to the other: there are always tyrannosaurs, horned dinosaurs (ceratopsians), duck-billed dinosaurs (hadrosaurs), and raptors (dromaeosaurs) among other creatures. However, there are always different species belonging to each group. Even formations of the same age, or nearly the same age, differ in their species when they occupy different latitudes on the continent. This suggests that there were multiple “mini-ecosystems” throughout Laramidia some seventy-five million years ago.

Around seventy million years ago, as continents shifted and climates grew colder, the sea began to dry up. This linked the mini-continents of Laramidia and Appalachia once again and opened vast new regions for land animals to inhabit. The fossils of this age suggest that the divided mini-ecosystems began to blend together. It was into this great new world that Tyrannosaurus rex appeared on the scene, occupying the role of top predator until the extinction of the dinosaurs sixty-five million years ago.

We still have a lot to learn about the ecosystems of Laramidia, even though paleontologists have been digging for dinosaur bones in Western North America for nearly two centuries. And if we’re still learning about our own, well-explored backyard, imagine the other big discoveries waiting all over the world! There is always more exploring, digging, and discovering to be done!

Check out this short video put together by the research team featuring Dr. Mark Loewen and Dr. Randall Irmis with the actual fossils of these tyrannosaurs!

From one of the authors on the new tyrannosaur study, Dinosaur Odyssey is an introduction to dinosaur evolution for general audiences and:

This is the original paper that describes the new fossil materials and their implications for understanding dinosaur evolution. It’s for a technical audience, so prepare for a challenging read. 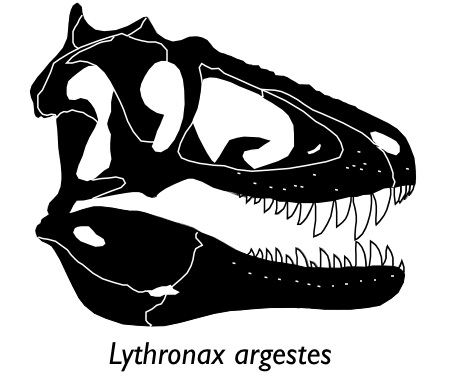