Fossils can be pretty scrappy. The best, most complete stuff is usually put on display at museums and photographed for books and websites, but a vast majority of material collected by paleontologists are fragments: slivers of teeth, fragments of shells, and splinters of bone. Paleontologists are trained to glean as much as they can from the patchy record, but the fragments can still leave a lot of mysteries unsolved about the soft-parts or “soft-tissues”: Was this dinosaur covered in feathers? Did this early mammal have fur? What did this lizard-relative chomp with those weird teeth?

While most of the fossil record isn’t very useful for answering these questions, there are rare fossil deposits where the conditions are just right and feathers, fur, and stomach contents are preserved. These rare sites – called “Lagerstätte” a German word meaning “locker” – are sprinkled around the world and offer glimpses into ancient ecosystems.

In this episode of Past Time, Matt and Adam discuss the conditions that lead to soft tissue preservation and a few of the places around the world where deposits actually preserve skin and organs. One of the most important Lagerstätte sites is the Messel Pit, a deposit near Frankfurt, Germany. The fossils are about 47 million years old and record the early history of the Cenozoic also called the Age of Mammals.

Click below for images of some of the near-perfectly preserved fossils found in Messel, as well as Lagerstätte deposits in China and Bavaria!

Solnhofen – The home of Archaeopteryx, probably one of the most famous exceptionally preserved fossils ever. Solnhofen also preserves dinosaurs, insects, and fish that share the lagoon with the earliest dinosaur-bird.

Lioaning – This Chinese site preserves feathered dinosaurs and early mammals from 125 million years ago and has been an importatant window into dinosaur ecosystems.

Messel – The focus of our discussion, this 47 million-year-old site preserves early relatives of many well-known mammal groups, including early bats, early horses, and early primates.

Lesmesodon – A weasel-sized carnivorous mammal that belongs to a group Matt studies called Creodonts. Creodonts were the top meat-eaters in many ecosystems before modern dogs, cats, and hyaenas arrived on the scene.

Propaleotherium – A terrier-sized relative of horses who still had four toes or “hooflets” rather than the one toe modern horses have evolved.

Most fossil deposits are a scattering of isolated bones and teeth with occasional “articulated” or still-put-together material. This is because most fossils are deposited in association with moving water which is responsible for carrying the sediment along that buries an animal in the ground.

But there are rare glimpses into ancient ecosystems provided by very slow moving, often stagnant water systems where low oxygen levels combine with fine-grained sediment to preserve the fine details of fossilized creatures. There are lagerstätte from throughout Life’s history including the Burgess Shale from Canada, a site that preserves some of the earliest diversity of modern animal groups.

In Episode 2: Birds are Dinosaurs! we discussed the historical significance of Archaeopteryx, a feathered fossil that may be one of the most famous fossils from a lagerstätte. The early bird is from the Solnhofen Limestone quarry in Bavaria, Germany. The quiet lagoon that formed the rock around Archaeopteryx also preserved specimens of thousands of animals, offering paleontologists a window into a tropical Jurassic ecosystem comparable to the coast of any Caribbean Island: 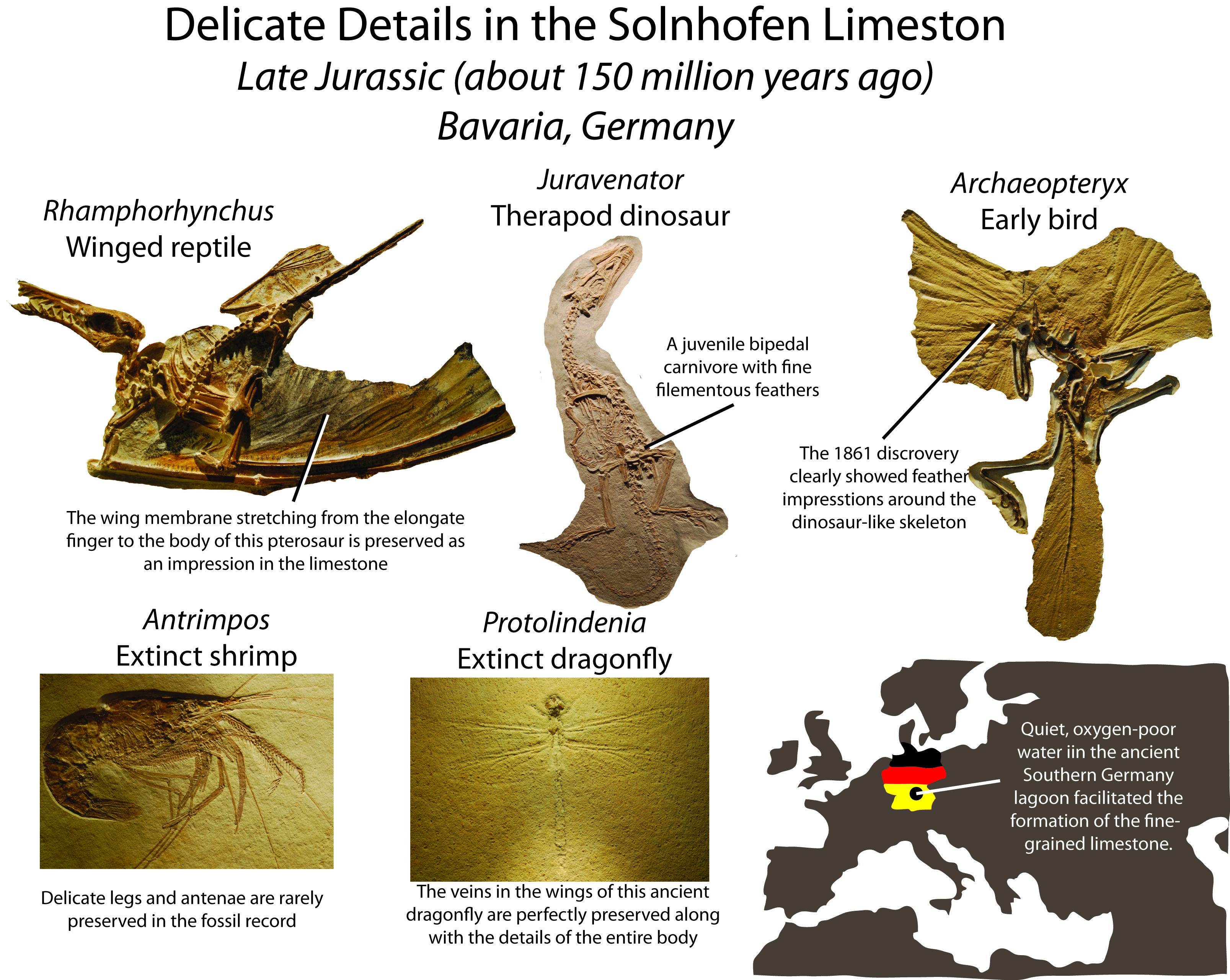 But Matt and Adam tend to gravitate towards terrestrial ecosystems, that is, land-based ecosystems, such as the diverse, forested world of the Yixian Formation in the Liaoning Province of Northeastern, China. Beautifully preserved ancient birds with feathers intact, and small herbivorous, non-avian dinosaurs with gizzards full of stones for churning up a meal, or stomachs full of vegetation are a chance to see the Early Cretaceous in all of it’s slightly more modern ecological glory. The formation is stuffed with plant and insect fossils that make the picture even more vivid: 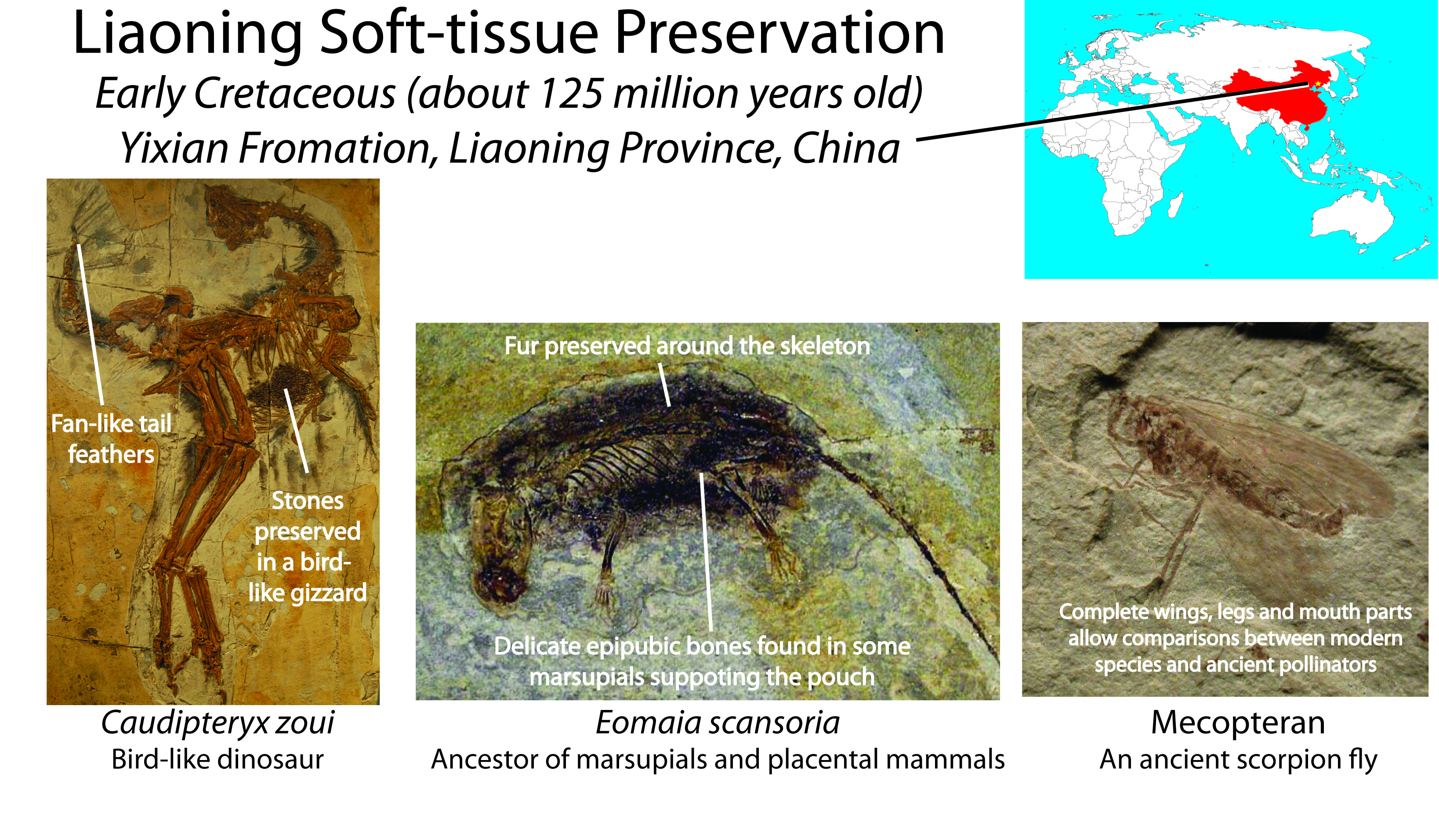 But in this episode of Past Time, we focused on an even younger site from the Eocene of Germany, a site that records the early evolution of modern mammal-dominated ecosystems:

Messel has been quarried for oil shale and coal for centuries and the fossils were known, but it was difficult to study them until a special combination of oil bathing and resin stabilization was developed. Then paleontologists could finally take their time understanding what formed the remarkable deposit and what the jungle preserved in the coal actually looked like: 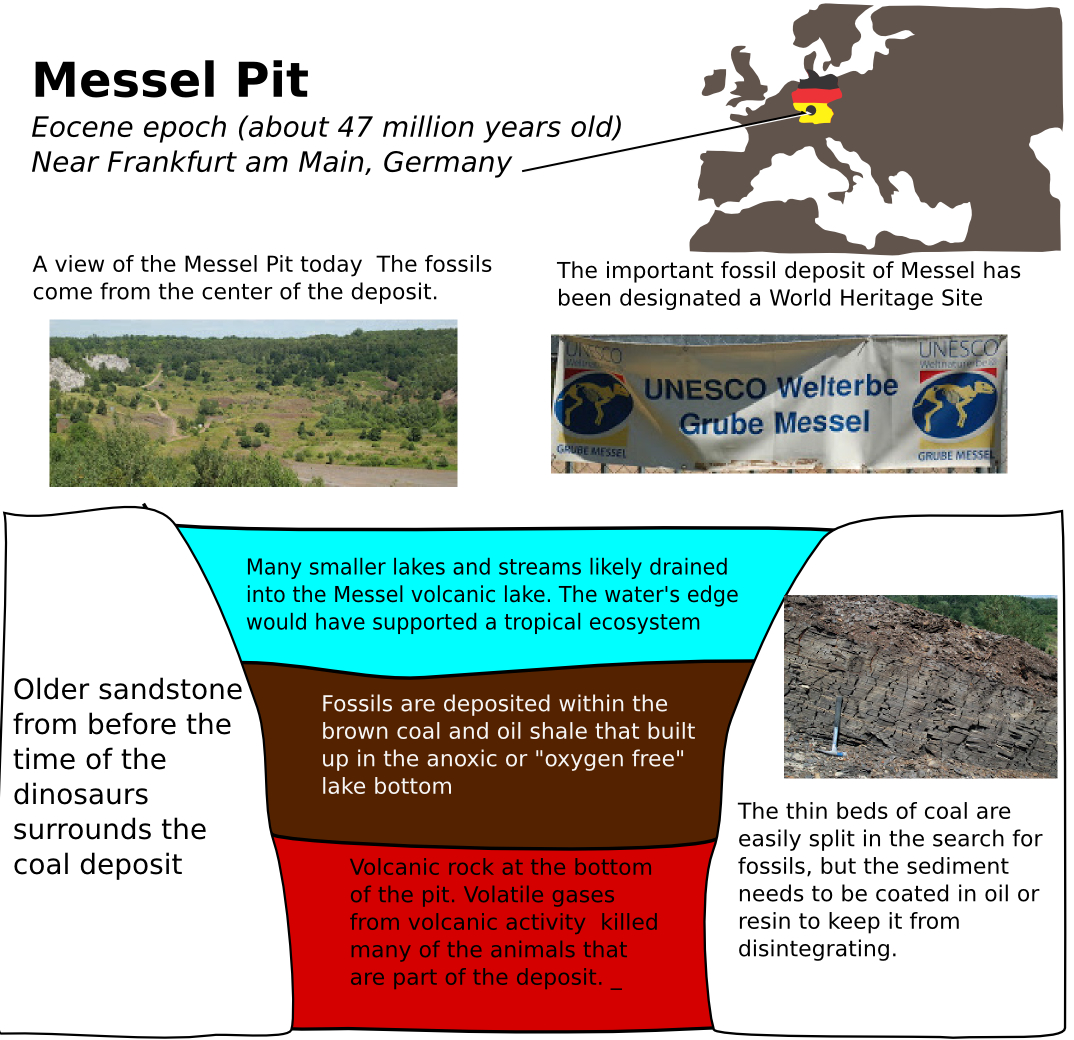 Who lived in the tropical Messel forest?

Plants, insects, spiders, turtles, birds, crocs, primates, horses, and bats all called Messel home. The violent explosions of noxious gases was an equal-opportunity killer and there are some species, such as the horses, that are represented by dozens of fossils, allowing paleontologists a chance to study how the animals aged, what they ate, and what ate them. 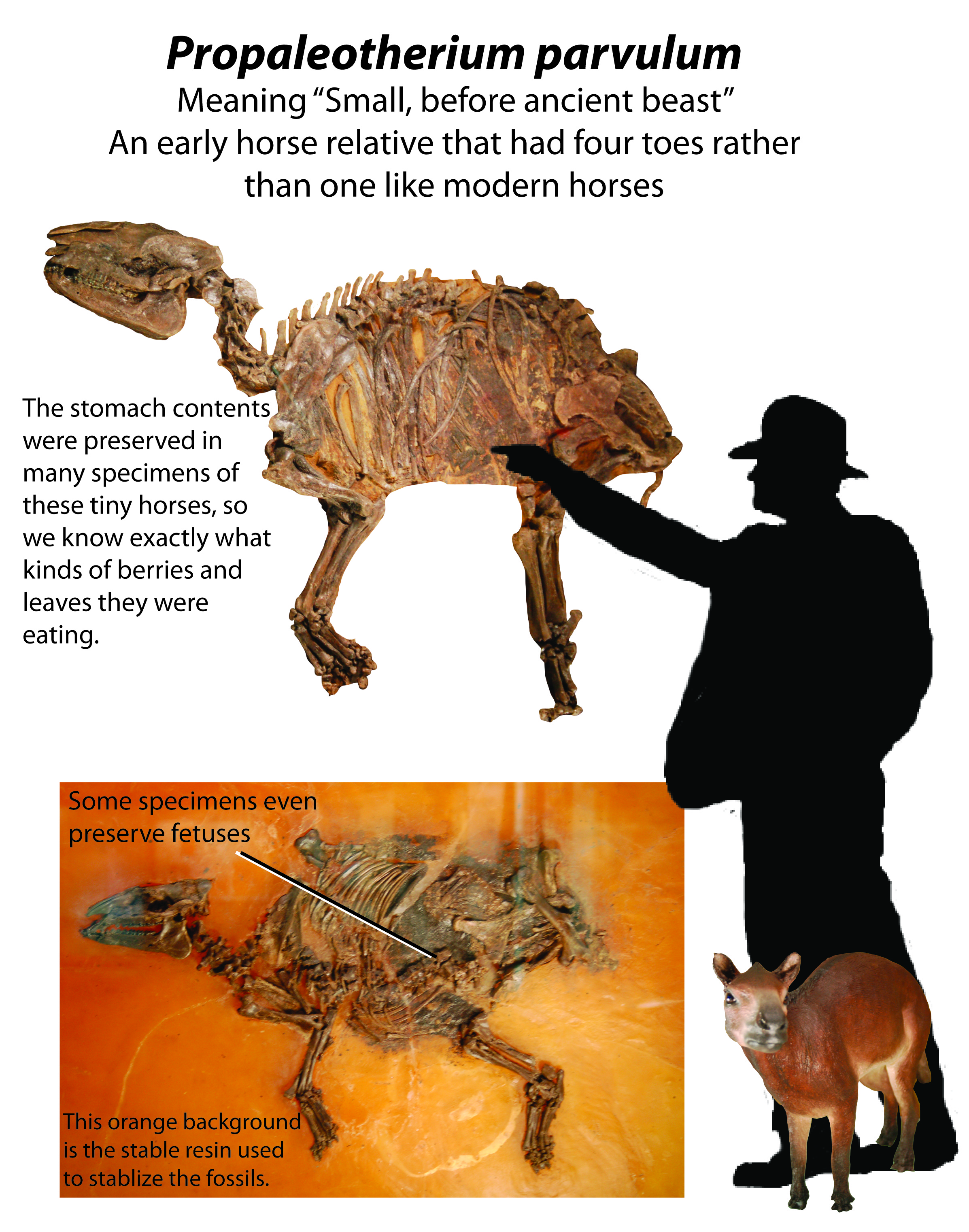 An important group that is also preserved in abundance at Messel are bats (Order Chiroptera). Normally the delicate bones and wings of bats are abused by the fossilization process and only the teeth remain. Messel is one of the best places to study the early anatomy of these flighted insect-eaters. Because there is such a diversity of species, paleontologists have compared their wings to modern bats in forested environments and have found the tiered hunting structure that characterizes bat communities today was already in place 47 million years ago: 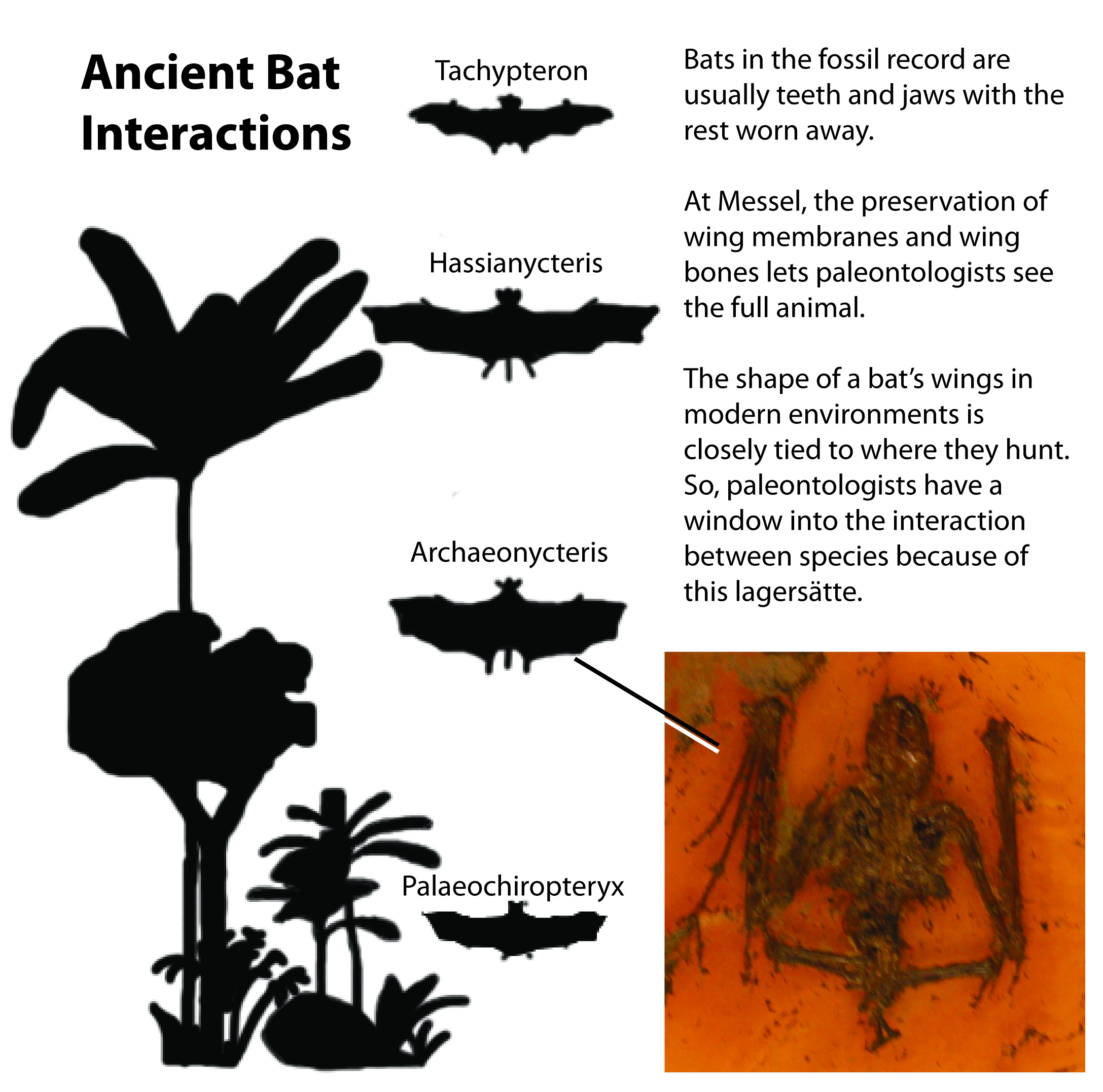 The recent description of Darwinius brought renewed attention to Messel, a UNESCO World Heritage Site when the initial researchers described it as an early monkey. Later research showed it was a distant cousin to the monkeys and fits more comfortably at the base of the radiation of primates that led to lemurs and lorises. The Darwinius fossil is typical of a Messel specimen for preserving a halo of fur around the animal and the delicate details of its fingers and toes. Darwinius is just one of the many beautiful mammal fossils that offers insight into the evolution of many modern mammalian families: 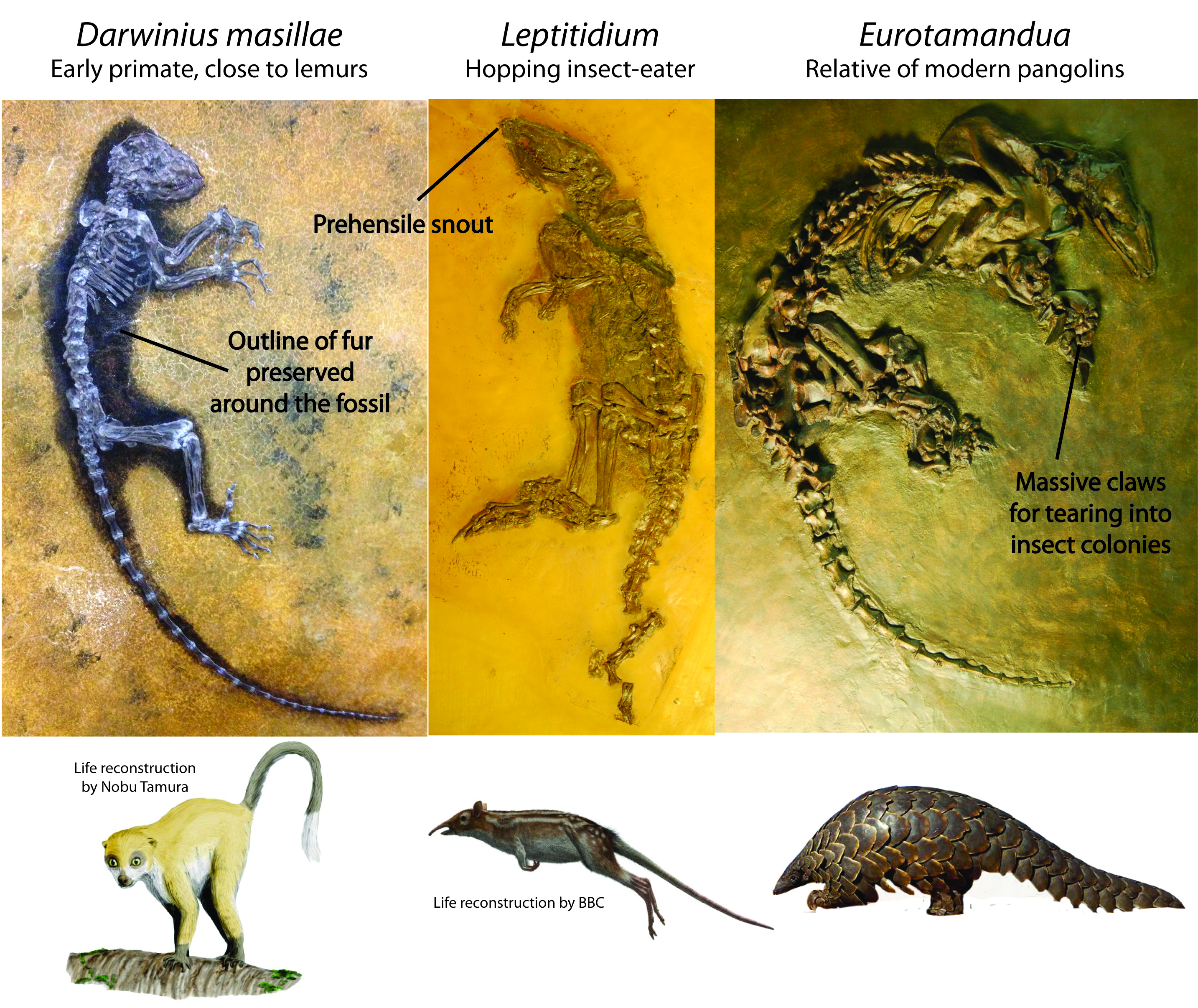 But Messel doesn’t only include mammal fossils. Crocodiles, who conveniently lived in the lake that would preserve their bones, turtles, and lizards are all found at Messel and offer reptile paleontologists a chance to study reptilian and avian ecology in the same way mammal paleontologists scrutinize the remains of horses and primates from Messel. Even paleoenomologists – people who study fossilized insects – have beautiful material to work with that would normally have been lost tens of millions of years ago: 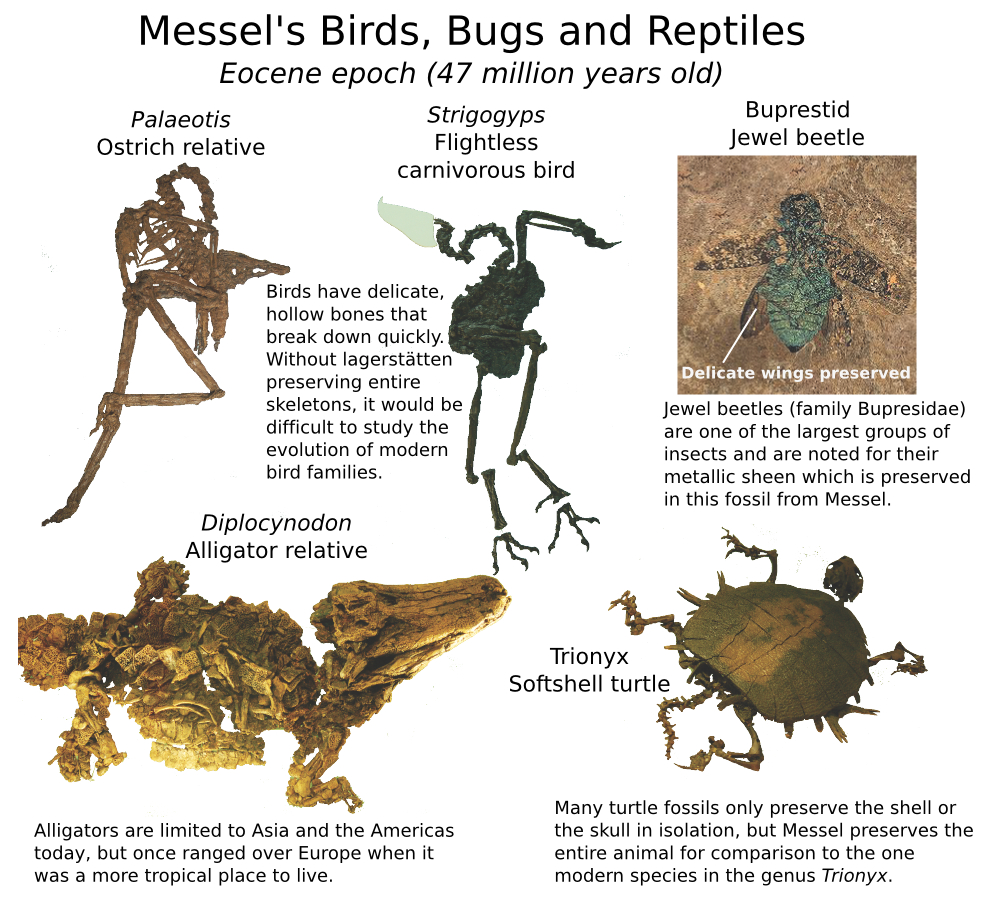 There are even interactions between reptiles and mammals preserved at Messel. One specimen of a weasel-sized creodont – an extinct radiation of carnivorous mammals that filled niches occupied by dogs, cats, and hyaenas today – called Lesmesodon is preserved with the teeth and bones of a lizard in its gut. That would be cool in itself, but then the skeleton of Lesmesodon has been compressed with its ribs appressed to one another and its shoulder bones slid down its chest. This specimen was constricted and eaten by a massive boa-like snake. Mammal eats lizard. Lizard (limbless) eats mammal. That’s karma: 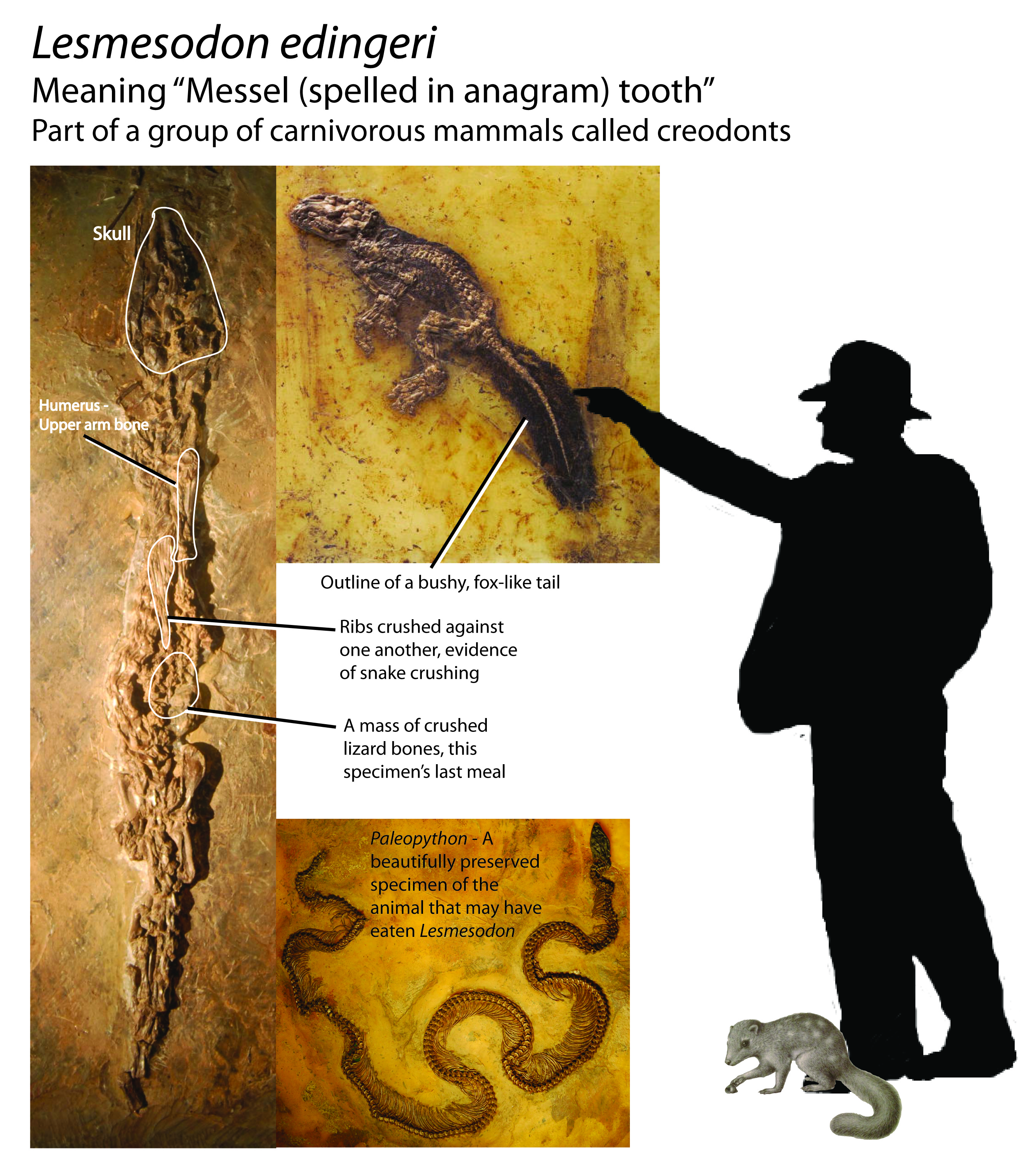 There are literally tons of fossils that have been hauled from Messel and from lagerstätten around the world, but the work isn’t finished once the fossil is out of the ground and named. New biochemical techniques have allowed paleontologists to sample preserved feathers for traces of color in extinct dinosaurs. Geochemical techniques are able to extract climate data from the finely-preserve rocks, and new imaging techniques have shown how fossilized animals matured. And the science continues!

The Rise of Horses (2010) by Jens Lorenz Franzen

Beginning of the Age of Mammals (2006) by Ken Rose 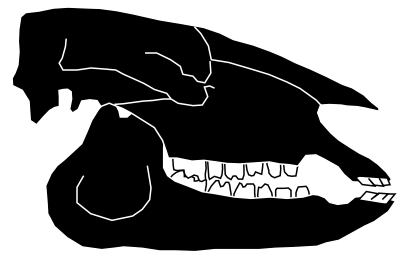