Meet Ocepechlon, one of the strangest turtles to ever paddle the open ocean in our first Past Time Quick Bite! This post is the visual companion to our podcast episode “Quick Bite: Ocepechelon the Whale Turtle.” To listen to the episode you can subscribe to our podcast on iTunes, download the episode here, or stream the podcast on your computer or phone by going here. However you listen, brace yourself to learn about a giant, vacuum-snouted, whale-nosed turtle!

Click below for images of Ocepechelon, the animals that shared its marine Cretaceous home, and a link to the original research article that announced the animal about a week ago (July 12, 2013)…

A link to the original research article describing Ocepechelon

Ocepechelon, whose name means “OCP (a mining company that helped excavate the skull) turtle”, is currently known from a lone skull, but that was enough to convince the researchers they had a new species of turtle. Below is an image of the skull as viewed from the side and from above. First off, the skull is huge, roughly two feet long. Based on comparisons of skull to body size in other sea turtles, Ocepechelon would be one of the largest turtles ever known, at least as large as the leatherback sea turtle, the largest living turtle which can weigh up to 1,500 pounds! 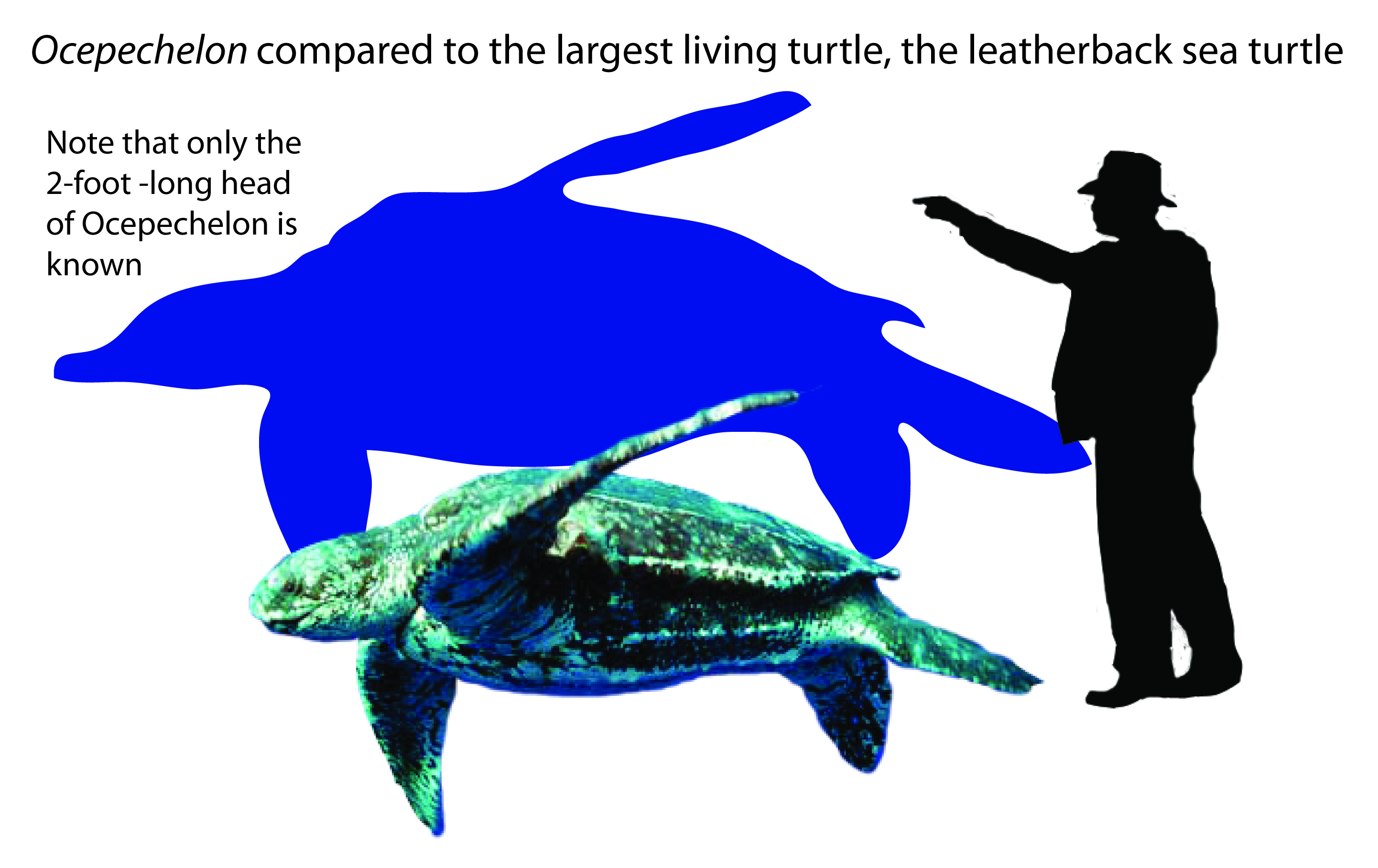 The French team that described Ocepechelon are confident it belonged in the family of turtles that contains all sea turtles. This is based on some details of skull and braincase construction. Check out the paper for the details of Ocepechelon’s relatives.

The skull of the large loggerhead sea turtle is next to the skull of Ocepechelon. This is the skull we would expect to see connected to a massive Cretaceous sea turtle. Notice the squared off beak and the nose near the front of its face. Ocepechelon was doing something very different. Its beak is elongated into a narrow tube and its nose would have been between eyes that sit higher and wider than most sea turtle’s eyes.

The tubular snout is a characteristic found in many marine animals that use a suction feeding technique to gather food. As aquatic predators chase their prey through the water, they push the water they’re displacing in front of them. This creates a bow wave, named for the wave that builds up in front of boats. The bow wave pushes the water and the food item like a jellyfish or squid away from the hungry predator.

To counteract the wave many marine predators create suction by opening their mouth very quickly. A large mouth that tapers to a narrow snout creates a back current more powerful than the bow wave and the food gets drawn in. If you’ve ever put a narrower nozzle on a vacuum cleaner to create a more powerful draw, you’ve experienced this. You haven’t changed the size of the fan on the vacuum, but it seems more powerful with a narrower tube. Pipettes work using this same big-reservoir-that-tapers-to-a-narrow-point principle.

The authors compare the skull and feeding technique of Ocepechelon to the beaked whales, a specialized group of mostly open-water whales that are toothless, just like turtles, but do just fine by drawing in soft-bodied and small prey. with wide-based heads that taper to a narrow snout. If Ocepechelon was a suction feeder, it would be the first known sea turtle to use this feeding technique. 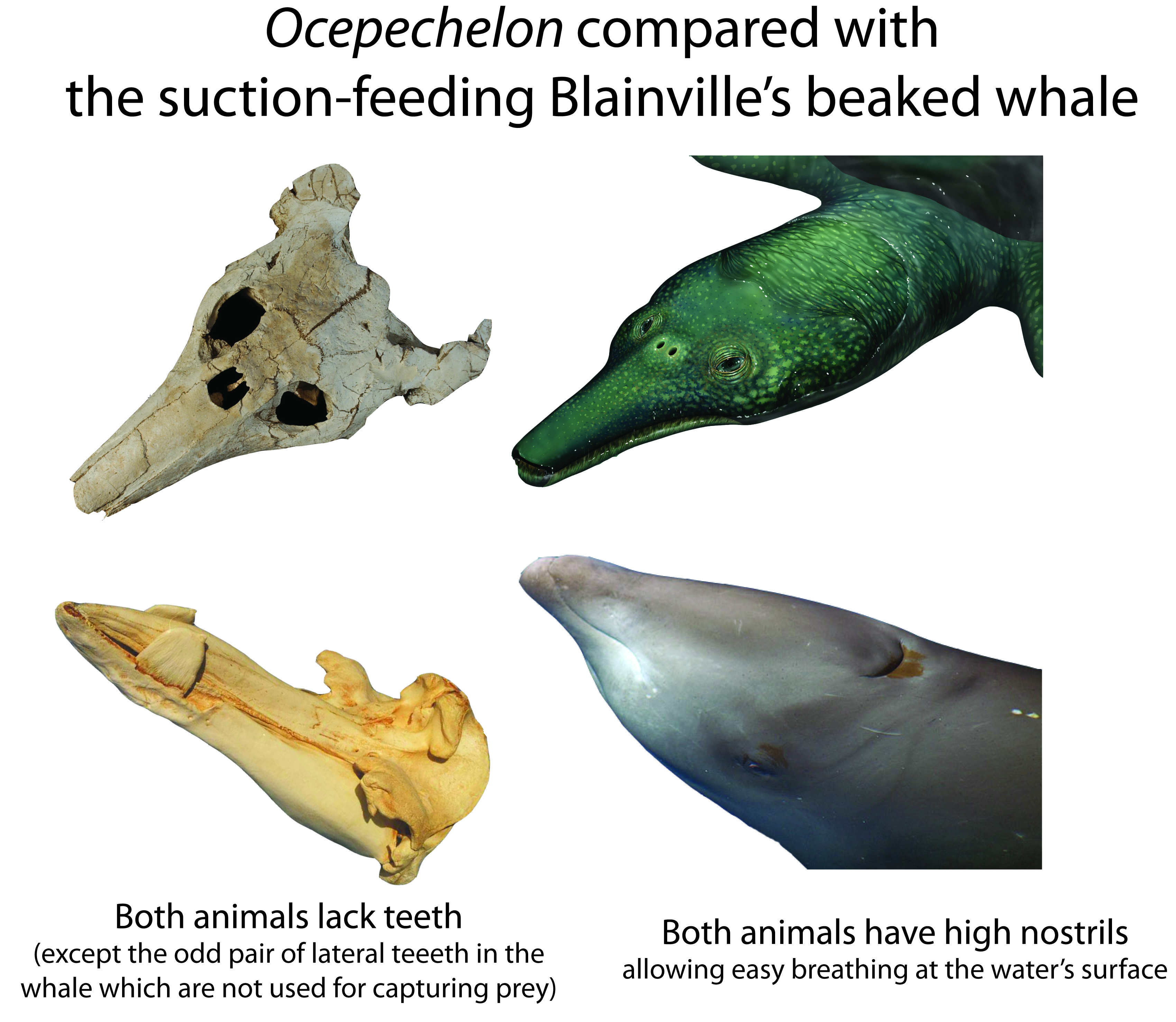 This video shows how a modern freshwater turtle called a mata mata uses suction feeding to suck down prey without moving its body. Here the turtle creates suction by dropping its throat and its entire head acts as the narrowed neck of the vacuum/pipette. The researchers working on Ocepechelon suggest the ancient turtle would have fed a little differently than a mata mata which they illustrate in this video:

The scientists who worked on Ocepechelon made this video of the massive turtle eating a fish to illustrate their hypothesized feeding method for the giant turtle.

Ocepechelon’s skull was found in the desert of Morocco in Northern Africa. During the Late Cretaceous, the end of the Age of Dinosaurs, North Africa was submerged and the shallow ocean above, the proto-Mediterranean Sea called the Tethys Sea, teemed with fish, squid, and the animals that ate them. Some of the extinct marine neighbors of Ocepechelon included gigantic, aquatic lizards called Mosasaurs which were related to monitor lizards such as the Komodo Dragon, long-necked marine reptiles called elasmosaurs (a group within the marine reptile group called plesiosaurs), and a relative of the modern gharial, a slender-snouted crocodile. 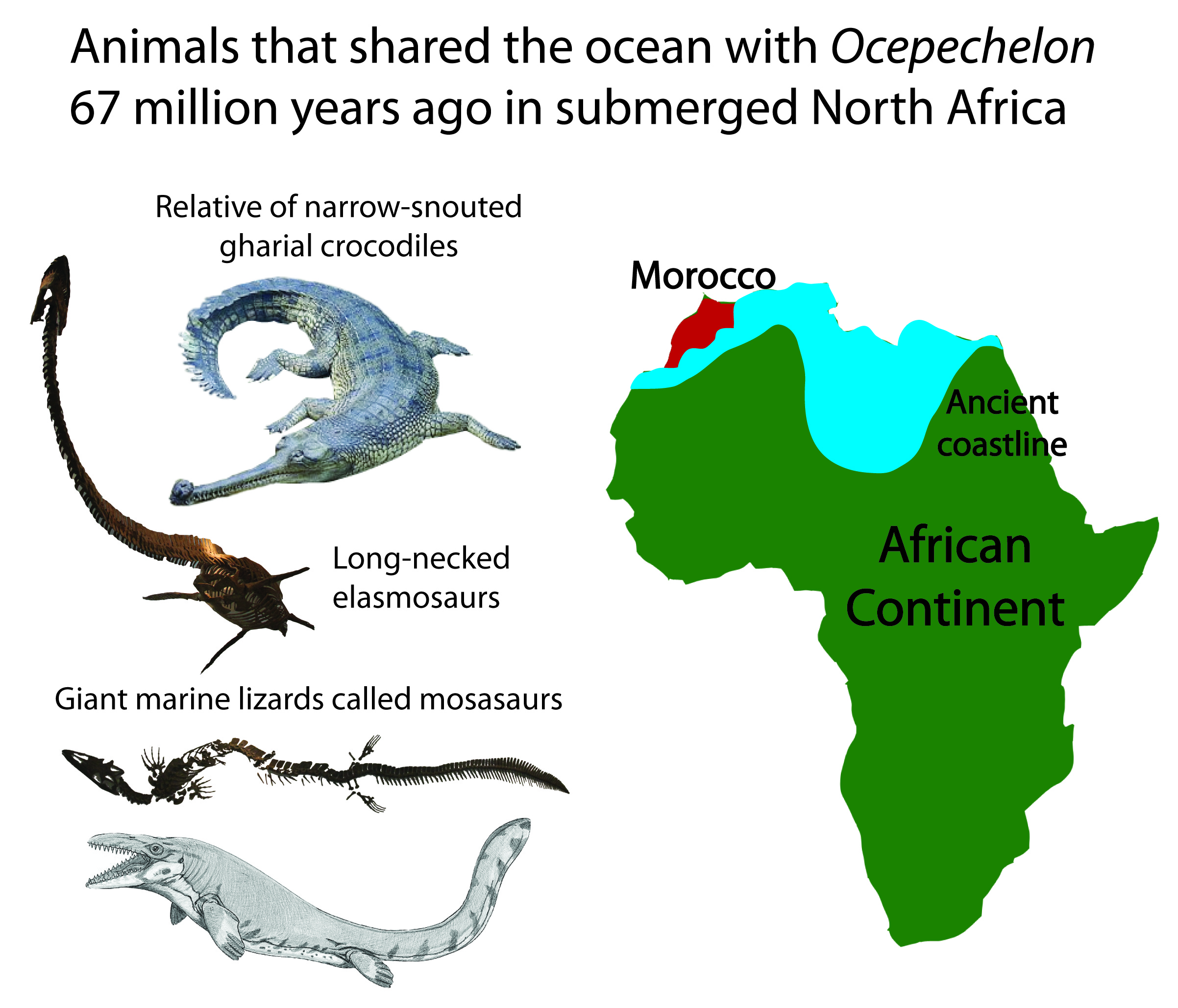 There are new species being described and studied by paleontologists all the time and we hope to keep you updated with some of the more remarkable discoveries in future Past Time Quick Bites!

For more information on sea turtles and their relatives check out Sea Turtles: A Complete Guide to their Biology, Behavior, and Conservation (2004) by James A. Spotilia