This episode of Past Time explores the biggest animals ever to stand upon the Earth: the sauropod dinosaurs. Sauropods were the biggest animals to ever leave a footprint on the Earth. They were the size of whales, but didn’t have the luxury of water to help them support their bulk! The massive size of sauropod dinosaurs intrigued Dr. Michael D’Emic and he has been scrutinizing their bone structure and relationships to figure out how these saurian giants managed to get around and consume enough food to keep growing. We talk a lot about relative sizes of many animals, but size is something that definitely benefits from some visual aid!

Listen to this episode by subscribing to the show on iTunes or by playing it in your browser or by downloading it. Continue reading for more background and illustrations for the episode. Have more questions? Need more details? Comment on this post, shoot us an e-mail, hit us on Twitter @pasttimepaleo or leave a comment on our facebook page!

Our featured scientist, Dr. Michael D’Emic, is currently a research instructor at Stony Brook University. Dr. D’Emic grew up in upstate New York, attending Boston University for his undergraduate degree. He then moved to Michigan for both his Masters degree and his doctorate, for which he studied the evolution of the sauropod dinosaurs. He is particularly interested in the titanosaurs, a subgroup of sauropods that was the last to go extinct at the end of the Cretaceous Period.

Sauropods evolved from a larger group called “prosauropods”, that appeared some 230 million years ago. They started out looking very much like a small carnivorous dinosaur (theropod), not much bigger than a German shepherd. “Prosauropods” rapidly became the largest dinosaurs of the Triassic Period, some reaching elephant-like proportions. By and large, these were animals that could alternate between two-legged and four-legged postures.  It was a small subset of these “prosauropods” that became the sauropods: bigger, bulkier, and with all four feet placed on the ground. Interestingly, these earliest sauropods co-existed with some of the two-footed “prosauropods” until the middle of the Jurassic Period (~180 million years ago).

As we discussed in the episode, the sauropods are best known for being enormous. The African elephant is the largest land animal alive today, and it could sit entirely under the neck of the large sauropod Diplodocus longus! In the image below, we also include the forelimb of an even larger sauropod, albeit one known from far fewer fossils than Diplodocus. These fossils hint at a brachiosaur that would have towered over a four or five story building. Despite this massive size, sauropods have skulls the size of a horse’s. How they managed to eat enough food to support the giant body through such a small mouth remains mysterious. 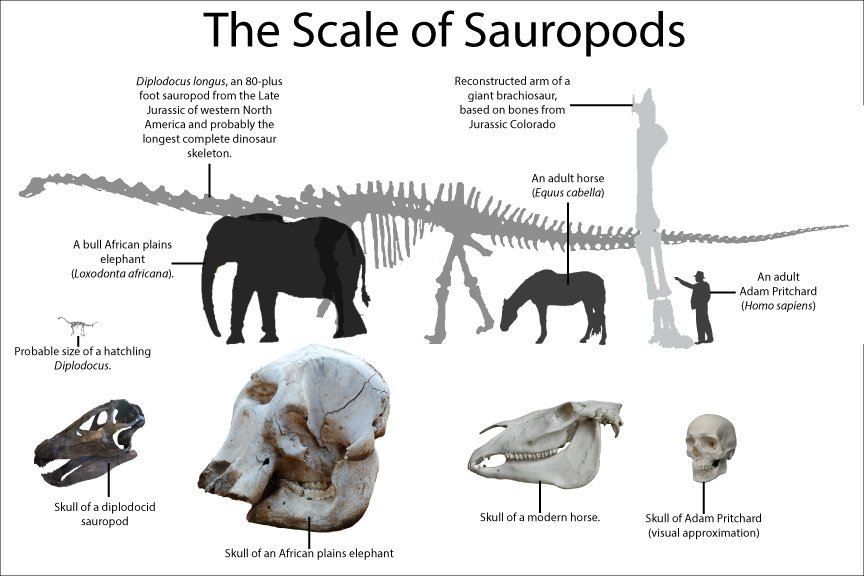 How giant sauropods reached their full adult body sizes remains an area of great interest. Studies of sauropod growth have benefited from recent, amazing discoveries of vast sauropod nesting worlds on several continents (Asia, Europe, South America). The most famous of these are from the Late Cretaceous Period of Argentina, where thousands of fossil nests of containing grapefruit-sized sauropod eggs have been found scattered over an area greater than two square miles. Many eggs still contain cat-sized baby sauropod skeletons, which give us a great idea as to how much change takes place between the hatchling and the full-grown adult. 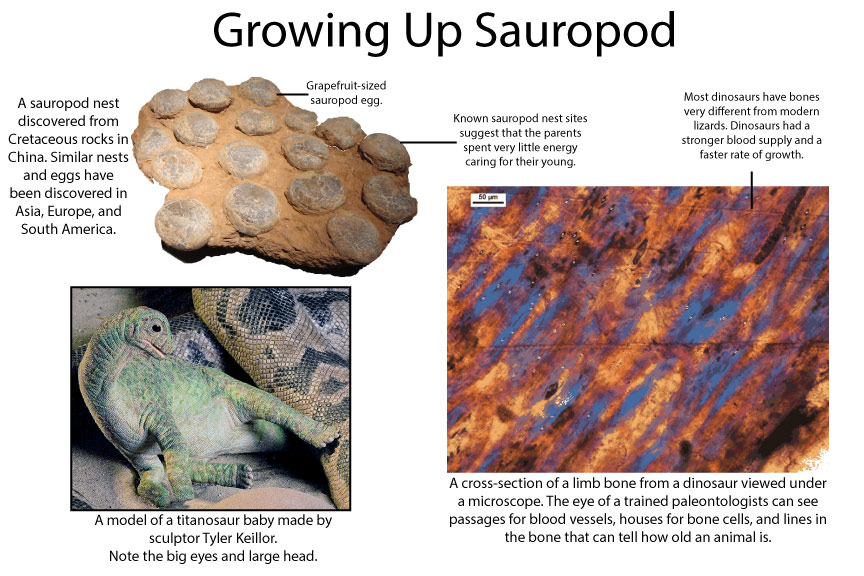 Because sauropod dinosaurs were so huge, early researchers thought they must have behaved a lot like whales do by putting their huge bulk in the water. But fossilized trackways found in the American West were clearly made while the mud the dinosaurs walked across was above the water line. Physicists further debunked the aquatic-sauropod hypothesis by showing the rib cage of a sauropod would crack under the water pressure above it and their lungs weren’t large enough to move air back and forth if the body was under water.

The fossilized tracks placed below Apatosaurus’s feet are cast of real trails. Sauropods are out of the water, but how they managed to sustain their whale-like bulk is still a great paleontological mystery.

If you have any questions about the largest dinosaurs and their strange lives, let us know by feel free to ask a question by sending an e-mail, sending a Facebook message at our Facebook page, or by finding us on Twitter!

For more information on the sauropods:

For further, quite technical reading on the sauropods:

The Sauropods: Evolution and Paleobiology, edited by Kristina Curry-Rogers and Jeffrey Wilson. 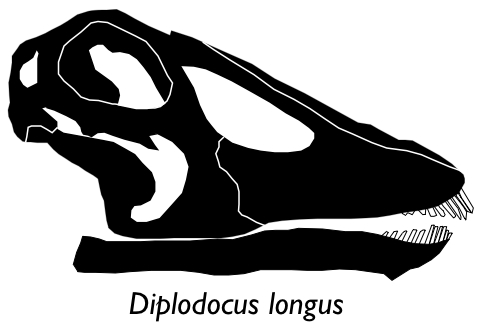