When you read the word “Reptile” what do you think of? A lizard? A snake? A crocodile? A turtle? All of these animals fit the loose definition of reptiles: covered in scales, unable to regulate their body temperature, and sprawling.

But in Episode 2, we explored the close relationship between birds and dinosaurs, so are birds reptiles, too? The feathers and warm-blooded-ness of birds messes with our definition of a reptile a little bit. While we’re trying to figure out how birds can be reptiles, think about mammals. Where did we come from? We weren’t always covered in hair, so our ancestors must have been a little reptile-like. Are mammals “reptiles,” too?

In Episode 3, Matt tries to figure out how all the animals we call “reptiles” are related to one another. Adam studies the earliest relatives of many reptile groups, so he’s the perfect person to help Matt puzzle through the relationships among amphibians, snakes, lizards, crocodiles, dinosaurs, and mammals. To listen to the episode click here to subscribe on iTunes or click here to download the episode directly or click here to listen through your browser.

Click below for the visual Field Guide for the episode, complete with fossils and photographs of the animals we talked about in the episode and a little more background for anyone interested in the full diversity of scaled, feathered, furred, and shelled reptiles…

Amniotes – Tetrapods that can lay eggs on dry land

Diapsids – The amniote lineage that includes many animals commonly called “reptiles.” Ancestrally they all have two holes in the skull behind the eye.

Synapsids– The amniote lineage that includes modern mammals. Ancestrally they all have one hole in the skull behind the eye.

Lepidosaurs – The name for the group that includes snakes, lizards, and tuataras.

Tuatara – The closest relatives of snakes and lizards. Their anatomy is very primitive.

Archosaurs – The name of the group that includes crocodiles and dinosaurs (so birds are archosaurs).

Turtles – Shelled amniotes. That’s as much as we can say with confidence as of June 2013. 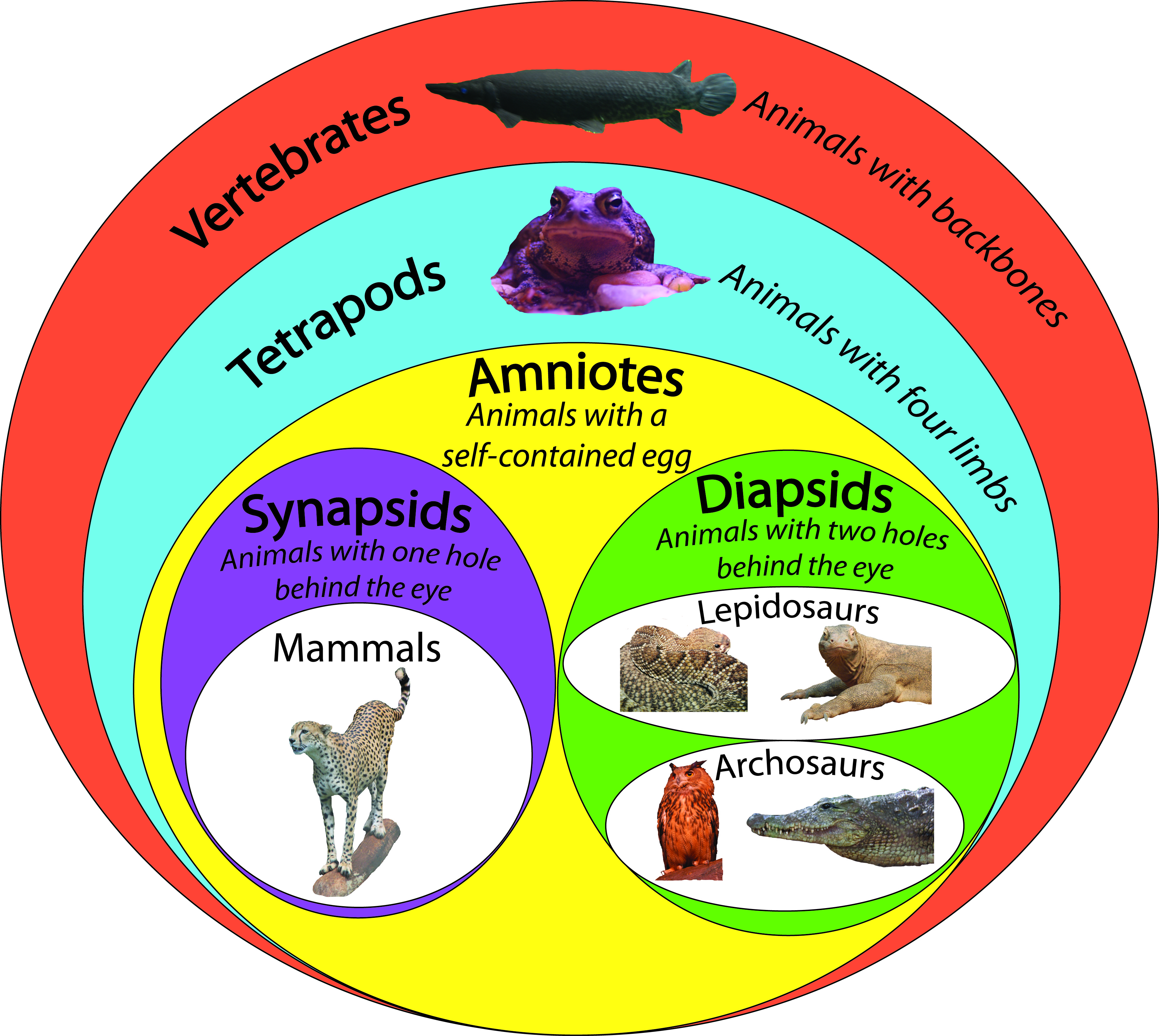 This chart shows how some of the unfamiliar new names from Episode 3 relate to one another. So, an owl is a dinosaur, an archosaur, a diapsid, an amniote, tetrapod, and a vertebrate. A vertebrate is any animal with a backbone, so fish are included in vertebrates, but they don’t have four limbs, so they are not included in tetrapods. Amphibians like frogs and salamanders have four limbs and are tetrapods but they lay eggs they need to be kept in the water. They do not have amniotic eggs like Amniotes. Ancestrally amniotes laid eggs with hard shells that keeps the embryo inside from drying out so they could be laid away from the water. Most of the diversity in amniotes is split into the synapsids – the group that includes mammals – and diapsids – the group that includes modern reptiles.

Groups on branches that meet share a common ancestor, like in a family tree showing siblings on separate branches that meet at a point represented by their parents. Connected groups share common features. You’ll notice we haven’t included turtles in our reptile family tree. We’ll deal with them in a bit, but know they’ve been placed all over the reptile family tree. There are also a bunch of extinct lineages of reptiles such as marine reptiles and pterosaurus that we left off this tree. We just want to lay out the basic arrangement of reptiles for now. We’ll hopefully get to more of the details in later episodes of Past Time.

Most of the diversity in amniotes is split between synapsids and diapsids. Synapsids are united by a single hole in their skull behind the eye (to anatomists this hole is the “post-orbital fenestra” meaning “window behind the eye”). Modern mammals, like humans, horses, and kangaroos have a single hole behind the eye. You can feel the edge of yours by running your hand along your cheek bone.

Diapsids have two holes behind the eye, one on top of the skull and another low behind the eye. These holes get modified by different lineages of reptiles, but the ancestors of all reptiles started with these two holes. Paleontologists and biologists aren’t entirely sure why synapsids settled on one hole behind the eye while diapsids added a  second hole, but it probably is related to the arrangement the chewing muscles that attach to the edges of these holes in both synapsids and diapsids. 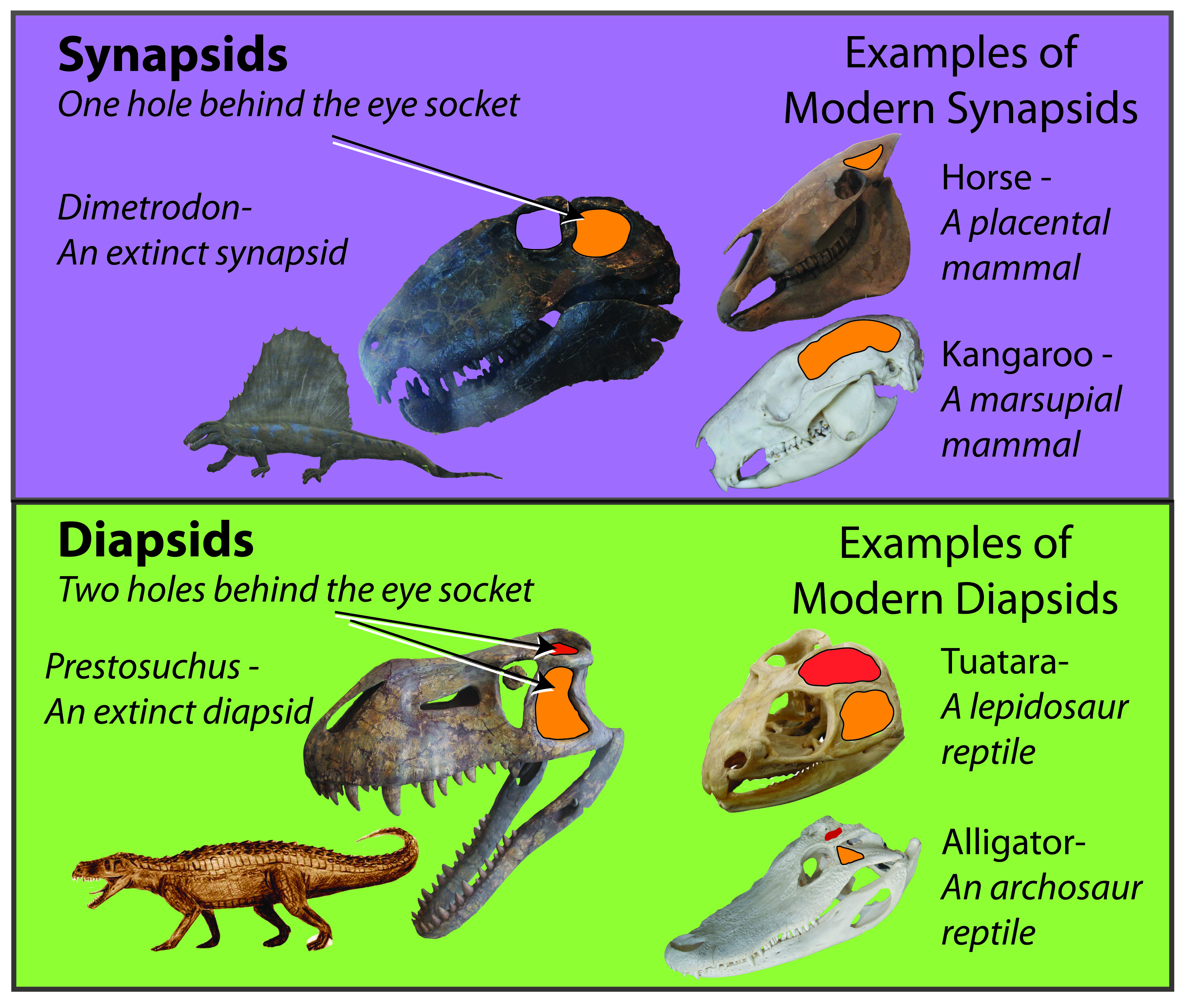 In this illustration, the 280 million year old (Permian Period) synapsid Dimetrodon shows the primitive condition for all later synapsids. Dimetrodon looks a bit like a reptile in the illustration though that huge sail on its back isn’t something you see in many modern reptiles. The early synapsids are sometimes called “mammal-like reptiles” because they look so reptile-like but have many features in the skull and teeth that reveal their close connection to mammals.

Prestosuchus is a 240 million year old (Triassic Period) diapsid from the lineage that leads to modern crocodiles, but its skull has many features shared by early reptiles including two holes behind the eye (in red and orange). These same structures are still present in some modern reptiles like the alligator and the tuatara, a distant lizard relative.

We’ll explore the diversity of synapsids in future episodes. For now, we’ll zoom in on reptile diversity. All reptiles alive today, with the possible exception of turtles, can be split into two groups: Lepidosaurs and Archosaurs.

Most lepidosaurs (a word that means “scaly lizards”) are grouped into the snake and lizard lineage and are called squamates (Squamata). Snakes are really a massive evolutionary radiation of lizards that lost their limbs at some point during the time of the dinosaurs. Tuataras are a lineage of lepidosaur reptiles that look like iguanas. But when biologists took a closer look at the anatomy of the small denizens of New Zealand, they discovered very primitive features that show tuataras broke off from the lineage leading to snakes and lizards a long time before modern snakes and lizards diversified. 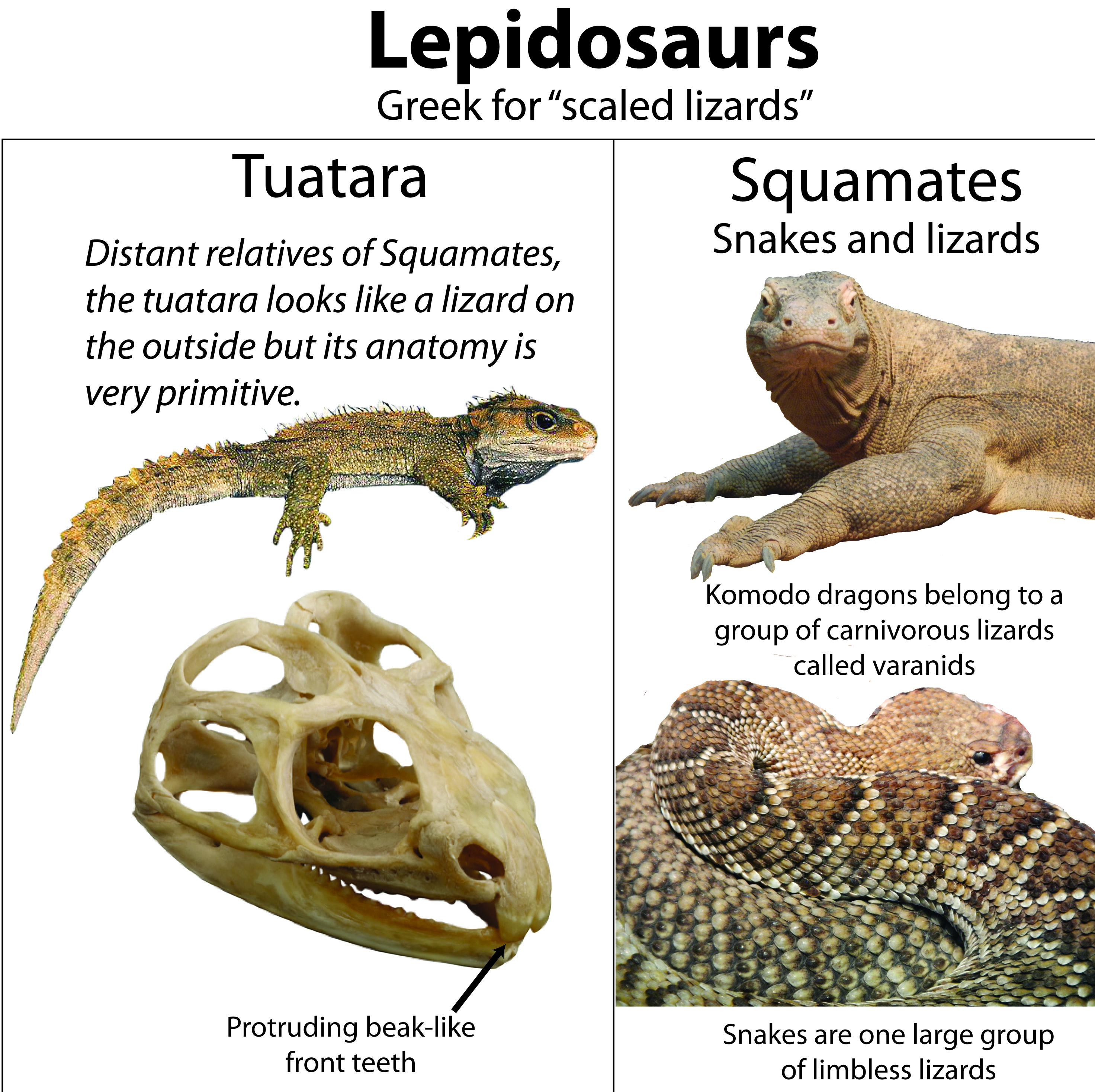 Lepidosaurs look pretty similar to one another with their sprawling posture, long tails, and scaly skin, but the group is actually very diverse with diets ranging from the carnivorous komodo dragon, a massive lizard capable of bringing down a cow, to the herbivorous iguana. Some lepidosaurs make their homes exclusively underground, like blind snakes, and others spend their lives in the tree-tops like the rhinoceros chameleon. 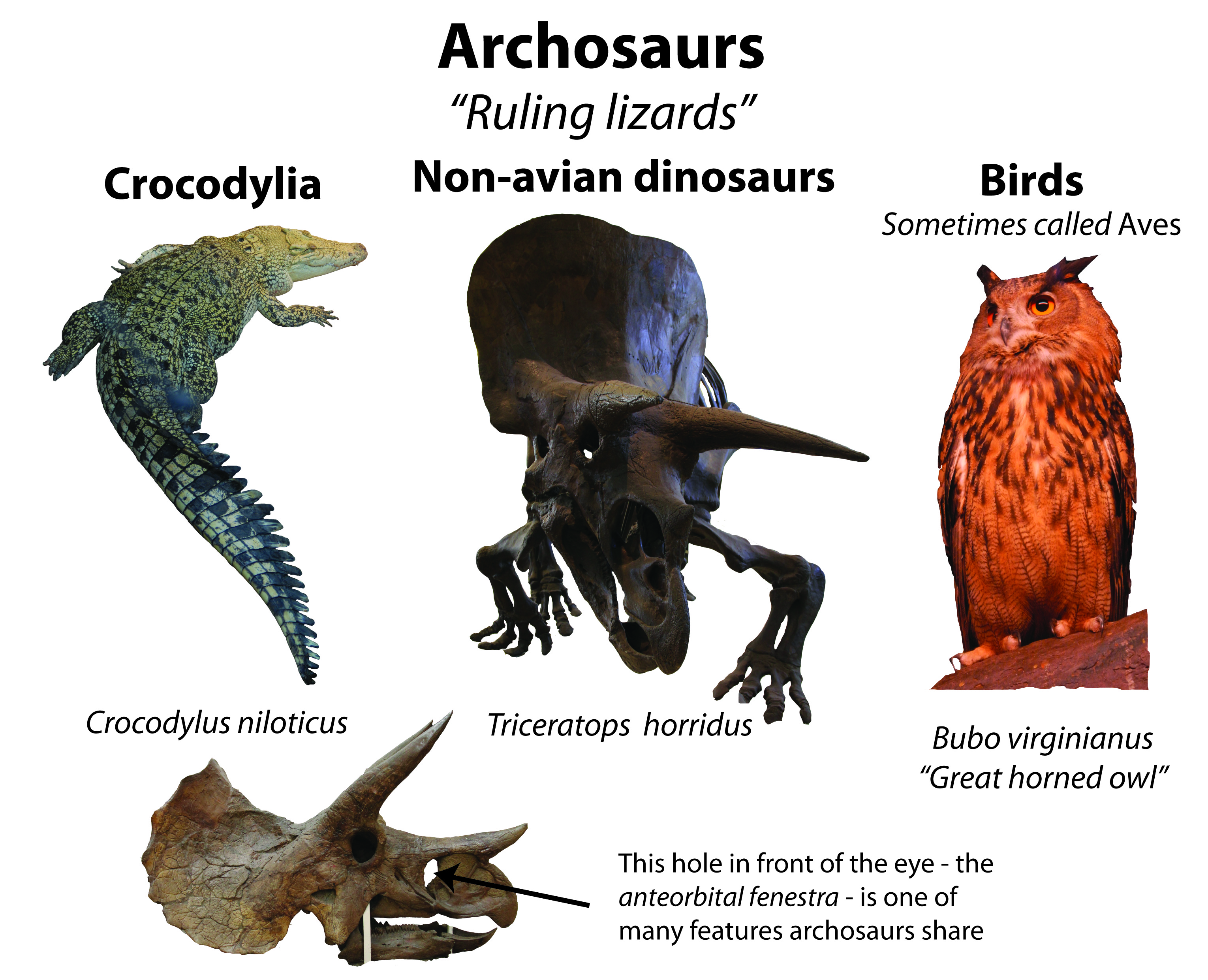 Archosaurs have much more diverse body plans than their distant lepidosaur cousins, ranging from the armored, semi-aquatic Nile crocodile to the dainty humming bird. Today, birds are a much more diverse group within archosaurs, but 220 million years ago during the Triassic, croc relatives and early dinosaur relatives were more balanced in their diversity. Archosaurs are united by a lot of anatomical features, but the most obvious is the presence of yet another hole in their heads: the “anteorbital fenestra” meaning “the hole in front of the eye.”

Turtles are the final reptile group to place in the family tree, and it’s not an easy task. Here’s just a sampling of the anatomical features unique to turtles: 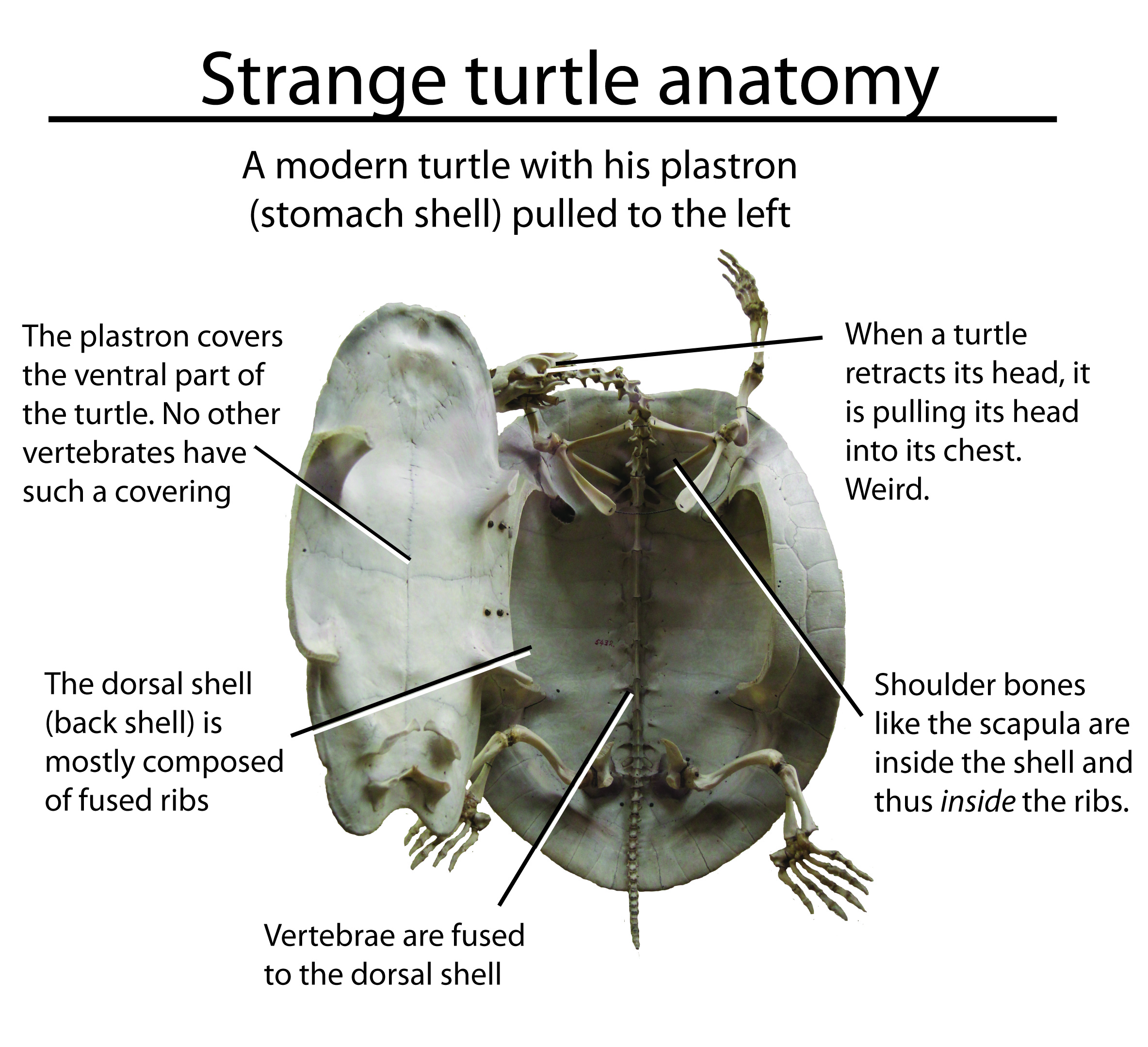 The shell, a combination of fused bone including ribs, vertebrae, and sternal (chest) bone, protects the turtle but also acts to restrict their movement compared to other repitles. Most reptiles can flex there spines as they move, but the turtle has bolted its vertebrae in place and must rely on its limbs alone to get around. Despite this restriction, turtles are diverse, ranging from the massive, marine leatherback sea turtle to the familiar box turtle.

When a  turtle pulls its head and limbs into its shell, it’s equivalent to you pulling your head deep into your chest and tucking your arms and legs into your rib cage. A really weird image.

The natural question to ask after learning about all the strange features exhibited by turtles is to ask where that shell came from in the first place. Do we have transitional fossils of turtles? Meet Odontochelys: 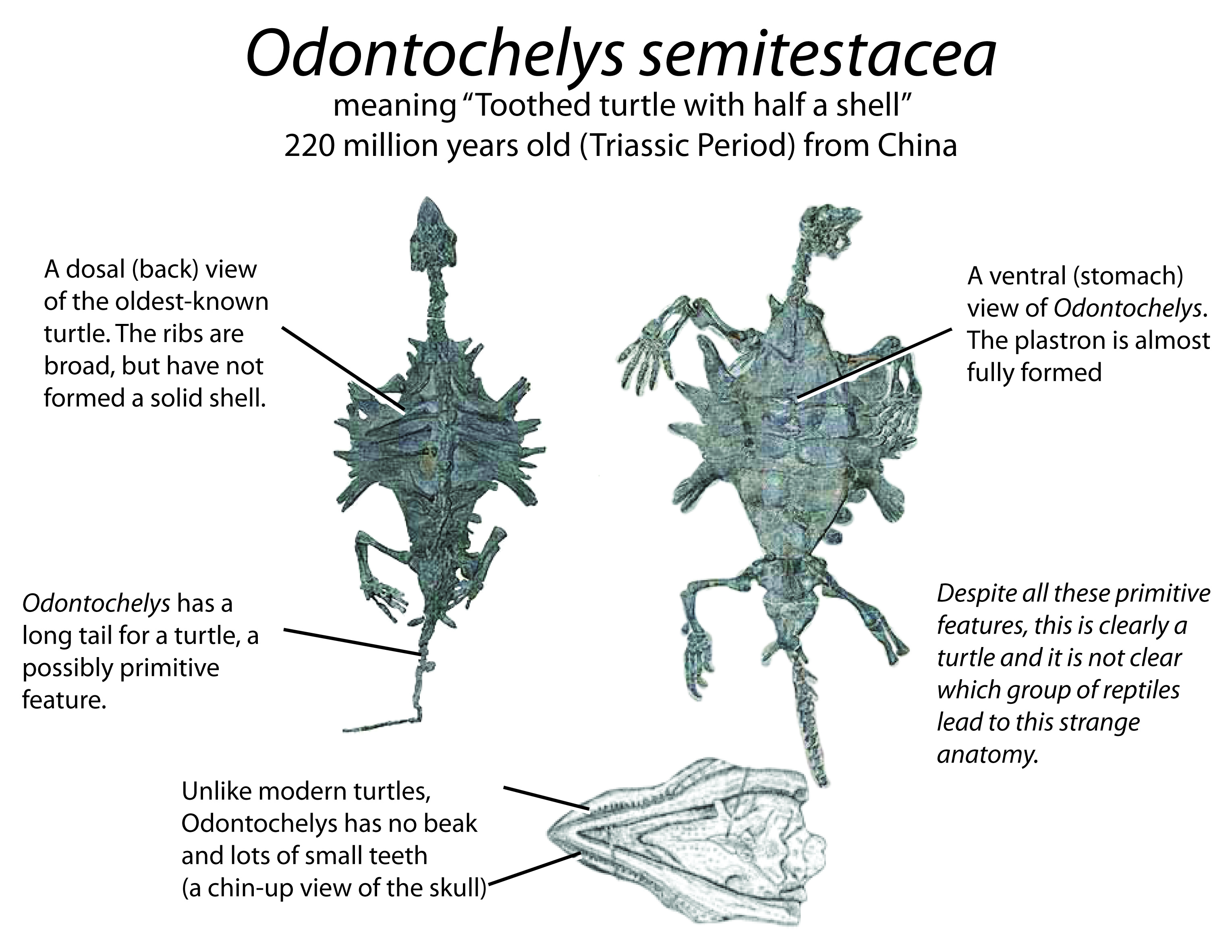 Odontochelys offers some interesting insight into the evolution of turtles. We know their beaks evolved after their plastrons (stomach shell) evolved and they had plenty of small teeth early on. But it doesn’t solve the problem of where turtles came from. The shell is well on its way to completion in Odontochelys. It’s definitively a turtle. There are as many hypotheses for where to place turtles in the reptile family tree as there are reptilian lineages, but the most popular hypotheses based on anatomy place turtles at the base of amniotes or at the base of lepidosaurs. Molecular evidence puts turtles in the archosaur lineage. It’s still an open question, and paleontologists continue the search for fossil turtle relatives that connect the dots between Odontochelys and other reptile groups.

If you have any questions about modern reptile relationships or you have a hypothesis for where turtles fit in the evolution of amniotes, let us know by shooting us an e-mail, sending a facebook message at our facebook page, or by finding us on Twitter!

For further information on reptile diversity we recommend:

Dawn of the Dinosaurs: Life in the Triassic by Nicholas Fraser and Douglas Henderson (2006) 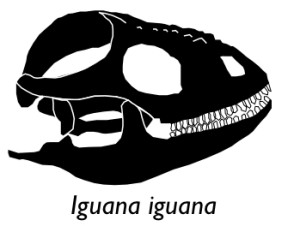