What is a dinosaur? What is a bird? They’re related somehow, but how do paleontologists figure out how close Velociraptor and penguins are in the dinosaur family tree? In this episode of Past Time, Matt and Adam talk to Dr. Alan Turner, an expert on fossils from the dino-bird transition to figure out which animals are most important in sorting out this incredible evolutionary story.

Listen to this episode by subscribing to the show on iTunes or by playing it in your browser or by downloading it. Continue reading for more background and illustrations for the episode. Have more questions? Need more details? Comment on this post, shoot us an e-mail, hit us on Twitter @pasttimepaleo or leave a comment on our facebook page!

Quick links for this episode:

Dr. Alan Turner is an assistant professor in the Department of Anatomical Sciences at Stony Brook University. His work involves the relationships and evolution of many extinct reptiles, including crocodiles and dinosaurs. We spoke to him specifically about the evolution of birds and their relationship to dinosaurs.

We begin with Archaeopteryx lithographica, Matt’s beloved missing link. However, as we discussed, Archaeopteryx is not some perfect halfway point between a dinosaur and a bird. Instead, the animal is one of many winged, feathered dinosaurs that lurk near the common ancestry of the raptor dinosaurs (deinonychosaurs) and the bird lineage. Although recognized as a bird for a very long time (Archaeopteryx skeletons were first found in 1861), it would take more than a century of debate and questions before scientists were able to lay out the case that Archaeopteryx also shared many features with the carnivorous dinosaurs (Theropoda, the larger group that contains deinonychosaurs and birds). 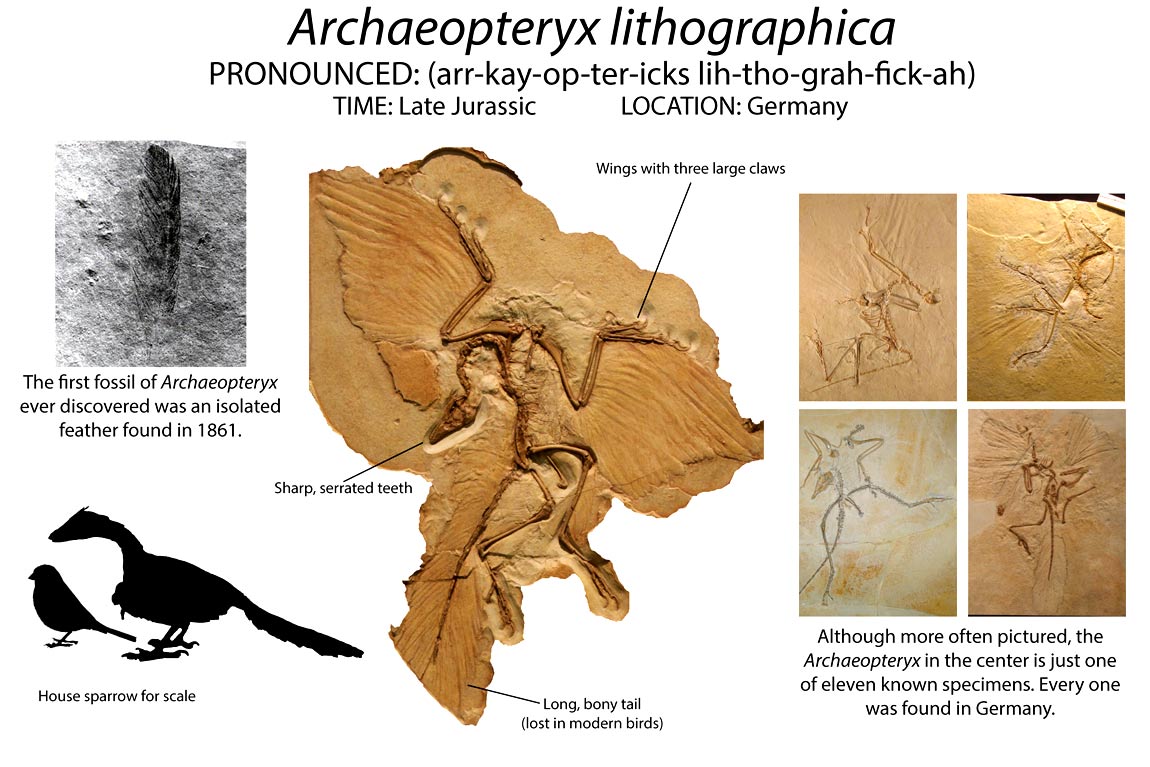 In life, Archaeopteryx was a toothy predator about the size of a modern crow. He surveyed the landscape of what is now Germany about 150 million years ago, close to the same time that Brachiosaurus and Stegosaurus were stomping around the American West. It’s unclear how good he was at flying, as the bones of his chest were not well developed for flight muscles. He shared the skies with a huge array of pterosaurs, the flying reptiles like Pterodactylus. 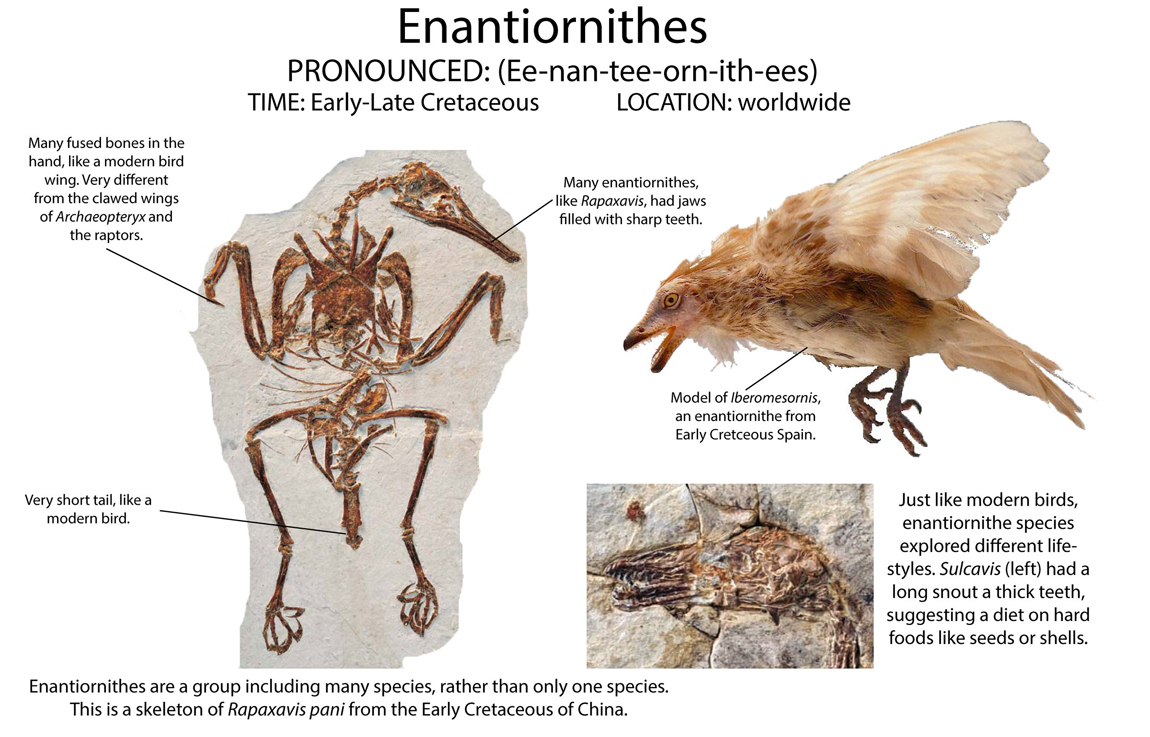 In the Cretaceous Period, the most successful bird group was the Enantiornithes. This is not a single species, but a huge group including dozens of separate species with many different adaptations. While they were not the direct ancestors of all of the modern bird groups, enantiornithean birds are a sort of “step up” from the anatomy of Archaeopteryx. The enantiornitheans did not make it past the end-Cretaceous extinction. Like all dinosaur groups except the modern-bird line, enantiornitheans went extinct at least 65.5 million years ago.

Velociraptor (Latin for “fast grabber or robber”) is the most famous member of the Dromaeosauridae, a group of carnivorous dinosaurs that shared sickle claws on their feet, large brains for a dinosaur, and a number of important skeletal details. Although the first members were discovered in the early twentieth century, it was not until the 1960s that the family Dromaeosauridae (Greek for “running lizards”) was recognized. 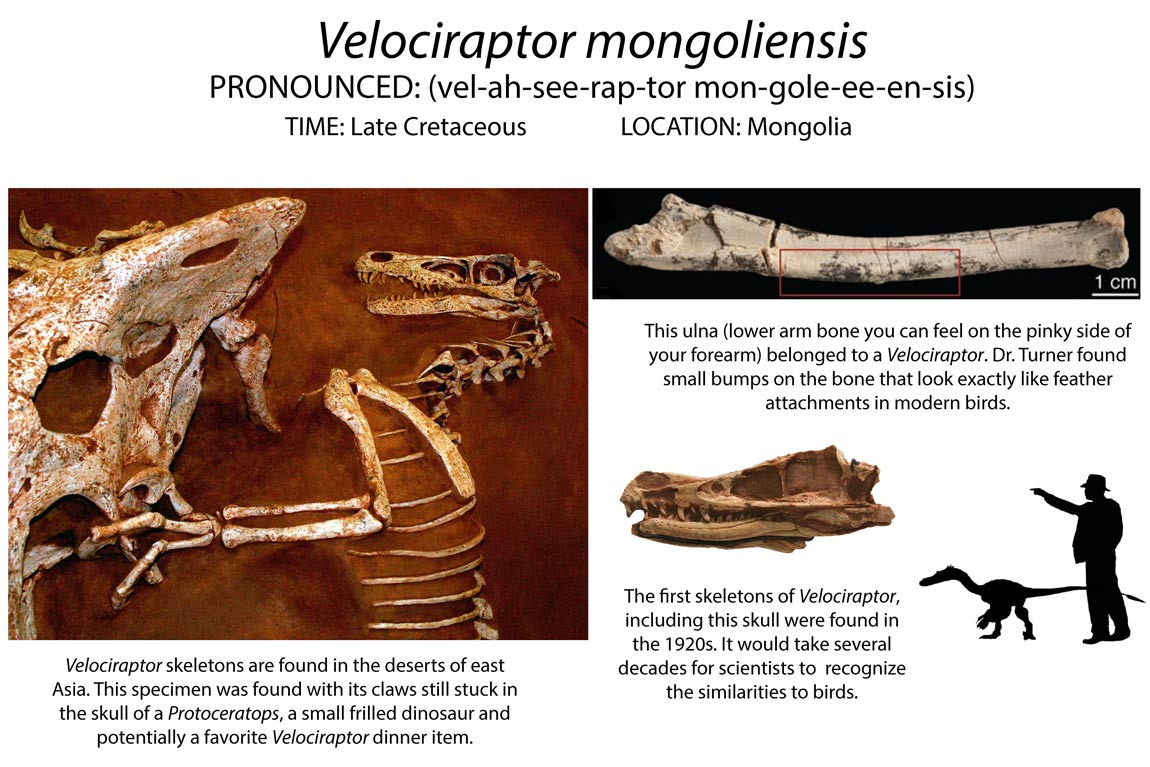 Dr. John Ostrom, a paleontologist at Yale University, discovered a close relative of Velociraptor in Montana in the 1960s. He named it Deinonychus (Greek for “terrible claw”). The discovery of Deinonychus and its kin led paleontologists to reconsider what is actually a very old theory first suggested in the mid-1800s: that birds are not only related to dinosaurs, but are part of the great dinosaur family. Most paleontologists now agree with this idea, although some scientists have problems with the theory. Virtually all paleontologists are in agreement that animals like Velociraptor are very close cousins to the birds. Further discoveries have revealed that dromaeosaurids, and indeed most carnivorous dinosaurs also had feathers.

One hundred years after the discovery of Archaeopteryx, paleontologists finally found new fossils of theropod (meat eating) dinosaurs that preserved feathers along with dinosaur bones. Most of these discoveries have come from Liaoning Province in eastern China. Many, many different carnivorous dinosaur species have been discovered with different kinds of feathers. A few tyrannosaur species were discovered with coverings of fur-like feathers! Other dinosaur species had long feathers on their arms, forming prominent wings, including Velociraptor. Velociraptor was too big to fly, but there were smaller winged raptors zipping around the Cretaceous Chinese forest… 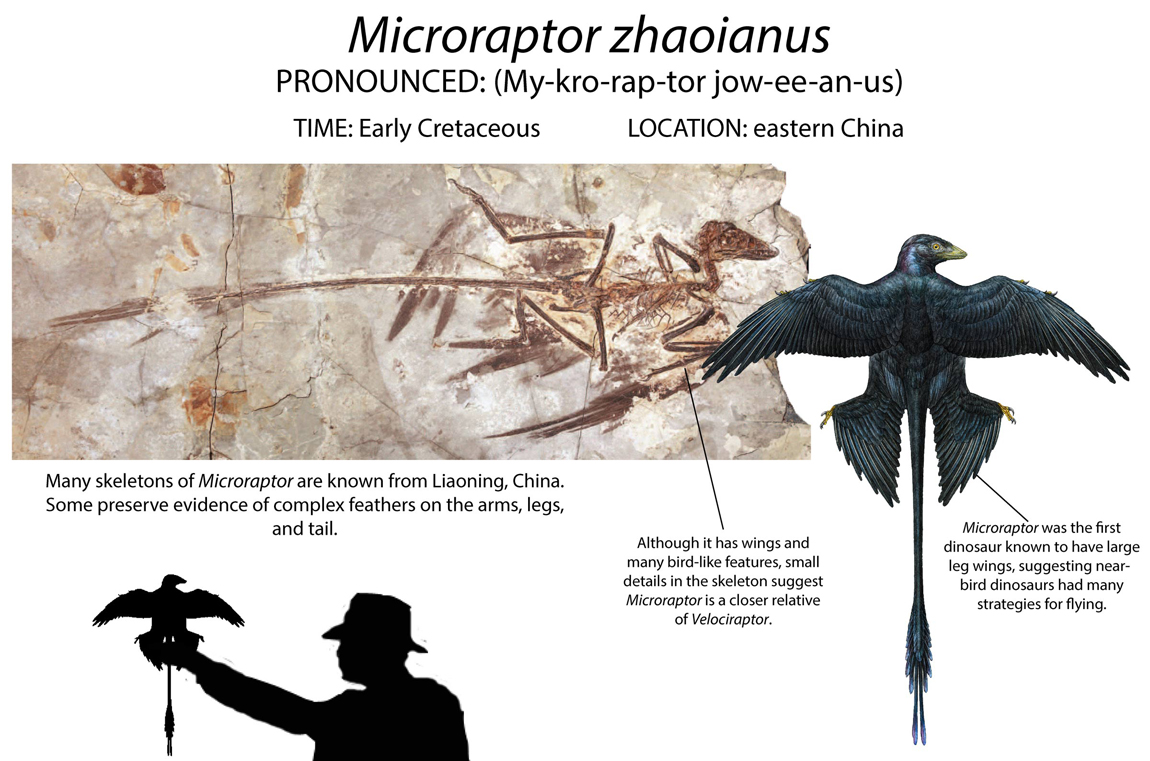 Microraptor is the best example of these winged dinosaurs. The animal has long, feathered wings on both the arms and legs! Many specimens of this dinosaur have been recovered, and most paleontologists concur that Microraptor is a very close relative of Velociraptor and Deinonychus. As the animal’s name suggests, Microraptor isn’t all that big. It is similar in size to Archaeopteryx. Some paleontologists think the similar sizes of Microraptor and Archaeopteryx suggest the common ancestor of raptor dinosaurs and birds was a toothy, winged predator not much bigger than a crow. The lineage that includes Velociraptor, Microraptor, and Deinonychus increased in body size while the bird lineage stayed a smaller and evolved more sophisticated flight adaptations.

So instead of a single, magic moment in which carnivorous dinosaurs sprouted feathers and wings to become birds, we are left with a much more complex story. Lots of carnivorous dinosaur lineages already had bird features, so much so that the birds and their closest relatives (the raptor dinosaurs) looked very much like Archaeopteryx. There was no grand jump from “dinosaur” to “bird”; rather birds are just a subgroup of other feathered, winged dinosaurs that managed to fly over the extinction that wiped all of their non-bird dinosaur kin. Why modern birds survived and are flourishing while so many of their close relatives went extinct is a question paleontologists are still trying to answer, and it’s one we hope to explore in future episodes of Past Time!

For other resources on the bird dinosaur transition for a general audience, we recommend:

Bones of Contention: The Archaeopteryx Scandals by Paul Chambers (2002). This book gets into the historical discovery and debates that surrounded Archaeopteryx from its discovery only a few years after Darwin published On the Origin of Species  to John Ostrom’s pioneering work through the end of the 20th century.

Feathered Dinosaurs by John Long and Peter Shouten (2008). The focus of this volume is on the feathered dinosaurs of China. This is the closest thing to a naturalistic Audubon guide to Mesozoic forests you’ll find with beautiful illustrations of Microraptor and many of its neighbors.

Feathered Dragons edited by Philip J. Currie, Eva B. Koppelhus, Martin A. Shugar, and Joanna L. Wright (2004). A group effort from many dinosaur paleontologists, this book is a great introduction to the more-technical discussion of feather evolution, flight adaptations, and the emergence of birds in the fossil record. 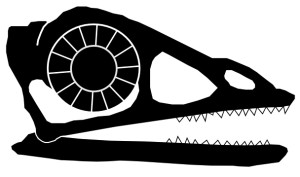 One thought on Episode 2 Field Guide: Birds are dinosaurs!